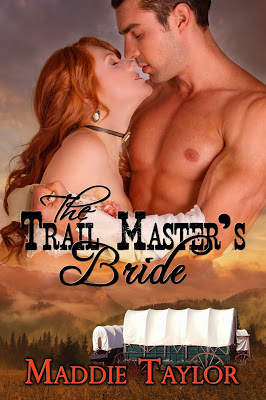 I have Maddie Taylor on with her new book The Trail Master’s Bride.  As you’ve seen, we are side-by-side on Amazon. She’s visiting us today with a super hot excerpt and we expect nothing less!

The setup
for my snippet:
Mina Hobart has a temper as fiery as her red hair.  On a wagon train in the middle of Indian
Territory is not the best place for that temper to flare.  Usually, she throws something-not a good
idea-or goes somewhere quiet to calm down, but with danger surrounding them,
that is simply not allowed.  The Trail
Master, naturally, will see that she understands that.
An excerpt
from The Trail Master’s Bride
She’d been allowed no more than five minutes of solitude
before an exasperated Weston Carr had once again come to fetch her back. On
foot this time, there was no thrilling ride while held in his arms, no teasing,
no conversation, no soothing touches like before, only an iron-hard hand on her
arm, as good as dragging her back to camp. She protested, digging in her heels.
At a point halfway between the trees and the wagons, he halted and turned to
her. Only then did he speak his first words.
“Man or woman, Mrs. Hobart, to me a promise given is a
promise kept. I don’t appreciate being lied to and having to come after you
every time you get a bee in your bonnet and run off. If I have to do so again,
you will not like the consequences. Are we clear?”
Mina swallowed, not liking the angry and very resolute
expression on his face. She also didn’t like the thought of what his
consequences might be. Swallowing hard, she nodded.
He began walking again, pulling her along silently, his long
fingers wrapped around her wrist in an unbreakable grip until he deposited her
at her husband’s side. “Take your wife in hand, Mr. Hobart. Or for her own sake
and that of every man, woman, and child on this wagon train, I’ll see to it for
you.”
Buy links
http://www.amazon.com/dp/B011ETYA38/ref=cm_sw_r_fa_dp_ZrvOvb103WB1F
http://www.barnesandnoble.com/w/the-trail-masters-bride-maddie-taylor/1122284195
https://www.allromanceebooks.com/product-thetrailmaster039sbride-1851300-340.html
The
official blurb:
Being cast out of her childhood home by her horrid stepmother
and forced into a marriage by her uncaring father were bad enough, but it is
only when twenty-year-old city girl Mina Hobart begins the journey west on the
Oregon Trail with her detestable new husband that she begins to truly
understand life’s cruelty. She hates every minute of each hot, dusty day, and
her husband’s constant insults certainly don’t make matters any better.
Mina’s life takes another abrupt turn when tragedy strikes and she
is left a widow. The west is no place for a young, newly single woman, and the
job of keeping Mina safe—and keeping her in line—falls to Weston Carr, the rugged
trail master. Weston quickly proves more than ready to tame the feisty redhead’s
careless ways and sassy tongue, even if that means taking her over his knee for
a good, hard, bare-bottom spanking.
Unfortunately, even as Mina does her best to learn to cook over
a camp fire, make coffee properly, and do the laundry in a creek, jealousy and gossip
among the other wives quickly build into significant strife in the wagon train.
To quell the gathering storm, Weston is forced to take matters into his own
hands and make Mina his bride, whether she likes it or not.
Despite Weston’s rough ways and firm-handed discipline, Mina soon
finds pleasure in his arms far beyond anything she has experienced before. But
when a series of mishaps befalls the wagon train—incidents in which Mina is the
prime suspect—the new couple’s growing bond is badly strained. Can Mina prove she
is not at fault before things come to a head, and if she does, will Weston be
able to protect her from whichever of their traveling companions is up to no
good?
Publisher’s Note: The Trail Master’s Bride is an erotic romance novel
that contains sexual scenes and spankings, including domestic discipline in a historical
setting. If such material offends you, please don’t buy this book.
Maddie
Taylor Links
You can
keep up with Maddie Taylor via her blog, her Twitter and Facebook pages, and
her Goodreads profile, using the following links:
http://maddietaylorromance.blogspot.com/
https://twitter.com/MaddieTWrites
https://www.facebook.com/maddie.taylor.121772
https://www.goodreads.com/author/show/7045130.Maddie_Taylor