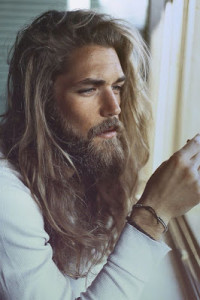 As promised, here’s the next part of the sneak peek.   The Renegade’s Captive  will be released soon and in your hands.  As the last book of The Widow Wagon Series, it’s been a little sad finishing this journey.  I can  hardly wait to share it with you all.

Anyone who knows me, knows how much I love Ben Dahlhaus — he is who I thought of while writing about Silas.  He fits his character very well.   I’ll be doing a cover reveal next week. Enjoy the continuation of yesterday’s excerpt!

He thrust into her with one shove, up to the hilt, causing her to grunt with the force.  The pounding rocked her harshly; she fisted the sheets to keep from being shoved off the makeshift mattress.

The wheels and chains rattled on the covered wagon, awakening some, if not all, of the other pioneers going west to Oregon.  But Minnie couldn’t drum up a whit of care for them.  Her focus and concern were now upon the climb to her release.  Her quim milked and squeezed him, her hips thrusting, meeting the rhythm of his hips slapping her backside.

“Oh!”  Minnie couldn’t contain her exclamation, her arousal heightened with their capture play.

The moist sounds of sex mixed with the chains clanking outside against the worn wood of the wagon, carrying her higher and higher toward her orgasm.  When Silas pushed a finger into her little back hole, she rose up onto her hands, growling and squeezing him so hard he growled in response, her body quaked and shuddered with her orgasm, her pussy holding him in a vice-like grip.

Minnie let her legs collapse from under her, landing onto her belly, his weight pleasantly pressing into her, his hot quickened breath on her neck.  They lay quietly, each regaining a measure of normalcy.

Slipping out of her, Silas rolled onto his back, pulling her to rest upon his chest.

“So, tell me, Little Captive, did you enjoy your kidnapping?”

“Yes, Sir.  But…how did you leave the wagon without me knowing?”

He chuckled, tucking a wisp of her hair behind her ear.  “My dear, you fall asleep quickly.  I’ve learned that nothing wakes you up – except this – within the first hour you’re asleep.  I slipped out as soon as your breathing became measured.”

“Don’t you think…do you think I’m deranged because of this?”

“No.”  The sharpness of his response set her stomach aflutter.  “I don’t believe that you’re deranged at all.  Do you think I am?  Because I like playing this as much as you do.”  He held her chin between his finger, not letting her look in a different direction.

“All right then.”  He let her chin go.  “Then we were meant for each other.  No one has to know about our sex games.  We don’t do this for anyone’s approval.  At least, I don’t.  Do you seek approval from others for what we do in privacy?”

Minnie couldn’t help but gasp.  Just the thought of any of her friends or the other pioneers knowing her desires embarrassed her.  “No, Sir.  I don’t want anyone knowing.”

“Then it’s solved.  We’ll continue doing what makes you drip with need and my cock turn to steel.”  Silas pressed her head to his shoulder, playing with the silky strands, softly stroking her back.

“There’s one thing I’ll have to do tomorrow, though.”

“Mmmm?”  She murmured, not lifting her head.

“Explain to everyone why the wagon was rocking with chains clanking like it was a ghost in the night.  I’m pretty sure we woke up everyone out here, including the livestock.”

“Oh, Silas.  How on earth will I face the women tomorrow?”  Minnie felt her cheeks warming with her blush.  Margie and Clara were excited that she’d met Silas, but this would be…just beyond humiliating, and the other women in the wagon train would be talking, casting shameful glances her way.

“Hey.”  Silas waited for her attention to return to him.  “You’ll have no trouble from the women of the Widow Wagon.  Angus seems to have a tight rein on them, and if you have any trouble with the other ladies, you tell me directly.  I won’t hesitate to talk to their husbands.  The last thing we need is trouble from the women.” 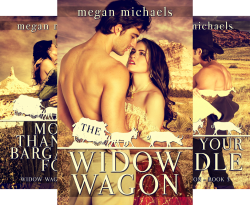 If you don’t own any of the Widow Wagon books–click on the covers and you will be brought to the Amazon page.   http://amzn.to/2duX37b