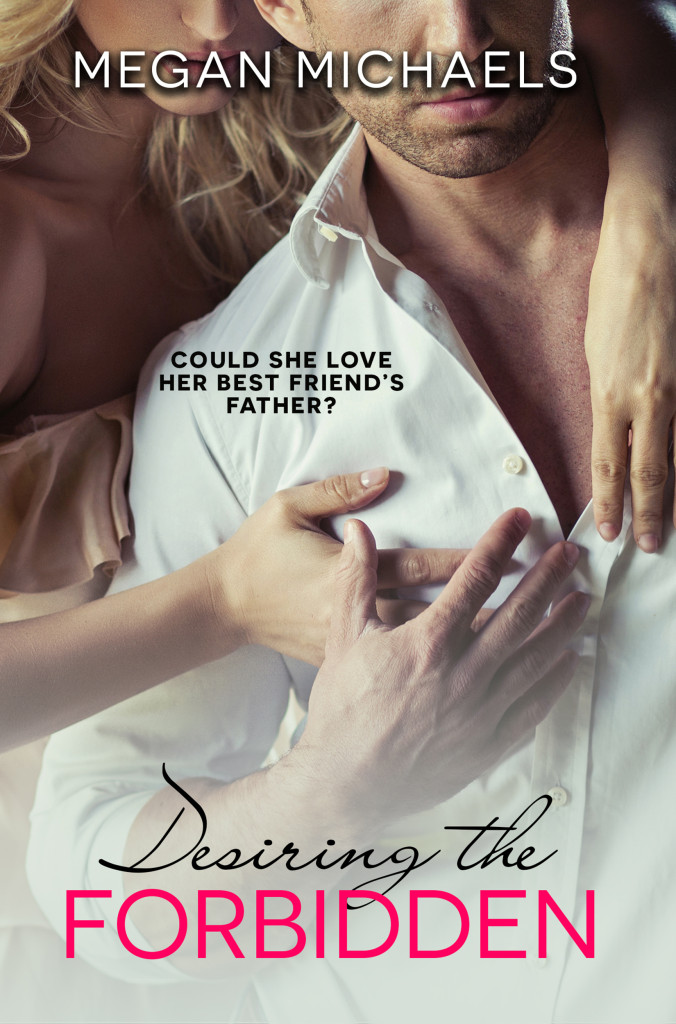 DESIRING THE FORBIDDEN IS UP ON AMAZON!  CLICK HERE TO BUY YOUR COPY

Well, while we are waiting for Amazon how about a sexy spanking excerpt?  Yes?  I thought it seemed like a good idea too!

Once the book is live, I will be notifying my newsletter fans first.  So make sure you have signed up, using the link below 🙂

I hope you all enjoy this excerpt!

Cade woke up, looking over at the clock. Eight in the morning. He needed to get up to check on Sunni and make her some breakfast. She’d fallen asleep long before the movie ended, and he’d carried her to bed, watching her sleep for a bit before going back to his own lonely, cold bed.

It amazed him how this whole situation had just fallen into his lap. He’d been looking for a woman who needed a Daddy, someone to cater to and cherish. Since Katie had left a year ago, his friend Matt had tried to match him up with other women who liked having a Daddy Dom, but they didn’t seem to mesh. Most of these women needed age play — which when he’d tried it in the past, he’d enjoyed certain aspects of — but he was more comfortable with a woman who needed a Daddy aspect to their relationship without falling into toys, sippy cups, diapers and such. There were many friends that he’d become friends with that needed those elements in a relationship.

[pullquote align=”left” cite=”” link=”” color=”” class=”” size=””]But he loved having a woman who enjoyed cuddling and discipline without those aspects.[/pullquote]

This seemed to be a perfect match for both he and Sunni. Lacking a father as a child left a void in her life, and he’d be more than willing to fill it for her. Just hearing her say ‘Daddy’ had filled his heart with pride. He quickly threw a robe on, walking down the hall to check on her. Her bed was already made — and Sunni was nowhere to be found.

He walked into the kitchen and living room, figuring she’d woken up before him and had started her day already. No Sunni. He called out for her. Nothing.

She better not have left the house.

Suddenly, he heard his truck starting outside, and he ran to the window, peering out.

“Oh, hell!” He threw on his boots, opening the door, and running down the walkway to the driveway. As he approached the vehicle, Sunni quickly locked the truck’s doors. He tapped the driver’s window, and her large, frightened doe eyes stared up at him. Pulling down on the shifter, she ground the gears on his truck.

Thankfully, the closest neighbor was more than two miles away. He didn’t need to keep his voice down. He shouted through the window. “Open the door, Sunni. Now!”

She shook her head, even though her eyes shone with pure fright at openly defying him. And rightfully so. He was going to blister her ass for this — once he was finally able to open the goddamn door!

She stared back, not even shaking her head now.

“I swear, if you don’t open this door immediately, when I finally get it open, you won’t be able to sit for a week. Open. This. Door.” He now spoke through gritted teeth, breathing loudly. “Trust me on this, you do not want me to force it open. And I will.”

He wasn’t exactly sure how he’d force the door open, but by God, he felt like he’d do it with his bare hands at that point. What in the name of hell was she thinking? Where would she go if she got this blasted truck in gear?

Her eyes had filled with tears and he knew he was close to getting her to relent, and obey.

[pullquote align=”full” cite=”” link=”” color=”” class=”” size=””]“Madison Anne Weaver, do you really want Daddy to get his belt? Is that what you want for your first spanking? Really?”[/pullquote]

She shook her head, her lip trembling.

He dropped his voice to a low, dangerous rumble. “Then open this door. Now, little girl!”

He heard her hiccup, a small sob escaping her lips. She knew her fate was sealed, but she also appeared to be bright enough to not want to make it worse. And it was good to know that she feared the belt this much. Reluctantly, she shut the truck off and opened the door.

She didn’t have to worry about opening it fully, for he snatched at the handle, throwing the door wide open. Pulling her out of the vehicle, he held her against his hip as he landed several hard, crisp swats to her jeans-covered backside.

She screeched, kicking her tiny feet while he spanked her harshly. Then he stopped, steadying her on the ground, pointing to the house and shouting, “In the house. Now!”

Both her hands cupped her bottom as she ran to the house, her cowboy boots clomping on the brick path. He took a deep breath, reminding himself to stay in control.

She’s okay. She didn’t leave, and didn’t put herself at risk.

He walked into the house, slamming the door behind him. He stomped the snow off his own boots, and he saw her jump up from the couch where she’d been waiting.

“Where in the name of hell did you think you were going?” He was shouting, initially, but forced himself to speak softer on the last word. He didn’t want to completely frighten her after all — even if a little fear wouldn’t be a bad thing.

“I-I couldn’t find my phone. And then I thought… I wanted…I decided to go tell my friends where I was. B-but I couldn’t get your truck into gear.” She rubbed her posterior as she talked.

“Thank God, you couldn’t! I have your phone, and as we discussed last night, you don’t need to alert anyone where you are, or what’s happening. I’m keeping the phone for your protection. Going to a friend’s house was a very bad idea.”

“You need to go to the corner and think about what you did today, how you disobeyed Daddy and put yourself in danger.”

She walked quietly to the corner, tears trailing down her cheeks.

“Jeans and panties at your ankles.” She took them down, her bottom very pink from the hard spanking he’d given her in the driveway.

He raked his hand through his hair, calming himself. He walked to the kitchen to get some water and to start the coffee pot. When he felt himself relax, he went back to the living room.

“Pull your pants and panties up.” He waited until she’d fastened them. “Turn around, please. You were told that you were to be escorted by me until they are arrested. Weren’t you? You agreed, remember?”

It was time to reinforce their roles. “Daddy.”

[pullquote align=”left” cite=”” link=”” color=”” class=”” size=””]“Well, you’re getting a spanking for this, little girl. Thankfully, you finally listened and opened that door — or you’d be getting acquainted with my belt right now.”[/pullquote]

“Oh, Daddy. I’m sorry.” She wrung her hands in front of her. Her whining wouldn’t sway him though. If he hadn’t heard the truck when he did, she could’ve been hurt, or worse. She needed a lesson — a very strong lesson — on obeying her Daddy’s rules.

He pointed his finger at her. “No. No whining. You asked for this, loud and clear. You’ll go to your bedroom. Pull your jeans and panties down to your ankles, and sit on a chair waiting for me. That little spanking you just received should keep you focused on your misbehavior. Go! Now!”

She ran out of the room, crying, and he heard the bedroom door shut.

Coffee. I need some damn coffee.