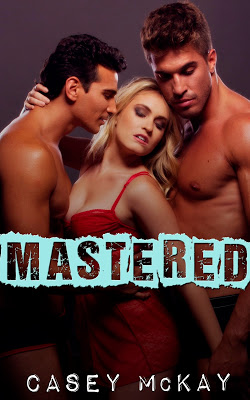 I have Casey on with her new menage book, and she has an excerpt for us!

Hi, Megan. Thanks for having me over to share an excerpt from my new book Mastered!

But, since she really isn’t assertive, I faced the problem of her
turning into a doormat. I didn’t want that. I wanted it to be believable
that while she was soft spoken and wide eyed and innocent, she could
still hold her own—even in the presence of these two strong, alpha
males.

She has submissive tendencies and as she tells her friend in the book, a
desire to be “mastered”. But she’s not going to just sit back and take
any crap from them. She still has a backbone.

“You remember I said there were no lies between us?” Tom asked.
She nodded slowly, “Yes, sir.”
“Good, then we want to ask you some questions,” Tom explained.

She opened her mouth to protest, but her words came out as a squeal as
he plunged the vibrating dildo into her pussy. Thrusting in and out of
her, she threw her head back. He teased her pussy lips, pulled it out
and pressed the toy against her clit before fully seating it inside of
her. He made sure the little clit teaser on the outside hovered right on
her little nub.
“Please!” she yelled. “I’m going to come!” She jerked against her restraints, but she couldn’t move anywhere.
“Not yet,” Tom said, coming forward and switching the toy off.

“Argh!” Hailey shouted. Her face turned pink and she shot them both a
murderous glare. Adam loved her wide-eyed and nervous, but he completely
adored her when she looked like she was ready to lose it. He suspected
their little angel had a temper.
“First a question,” Adam said.
“Another game?” she spat out at him.

“Of course,” he said, savoring her frustration. He really was a
bastard. “Think carefully before you answer, because if you are anything
less than honest then you won’t like the consequences.”
She narrowed her eyes at him. It ignited something inside of him and it kicked his Dom mode into high gear.

“No you aren’t,” he said, his voice steady, inflecting that hint of
steel that gained her full attention. She turned her eyes to him,
pleading.
“Please,” she begged, as he rocked her forward again.

He watched all her muscles tense as she screamed again—tears popping
into her eyes. He switched the toy off, but kept his hand on it.
Wrapping his hand around the back of her neck he leaned his forehead
against hers. “Do you get to choose when you come?”
“Please,” she whimpered, her voice hoarse. Her chest heaved as she panted, a few tears  leaking out the sides of her eyes.
“Do you?” he asked again, not releasing his hold on her and not giving up the point he just proved.
“No,” she croaked. “No, sir, I don’t.”
“I’m glad we understand each other,” he said, placing a kiss on her forehead and easing the toy out of her.
She groaned at the loss. “Please, please, sir. Can I come? I need to come.”
“Be a good girl,” he said, tossing the vibrator to the bed.

Tom glanced at him and stepped forward. The way Hailey sat there,
hanging on their every word, it made him rock hard. How were they going
to get anything out of her when he was having trouble keeping his hands
off of her?

One thought on “Submissive, Not a Doormat”