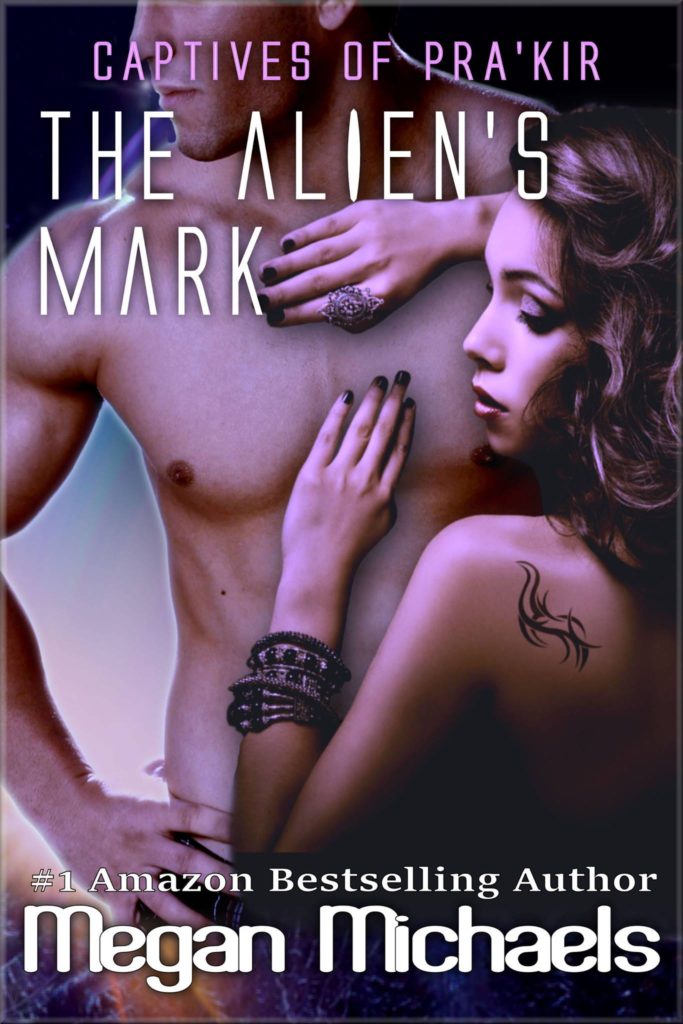 This is a continuation of the prologue for THE ALIEN’S MARK (CAPTIVES OF PRA’KIR BOOK 4) that was posted on BJ Wane’s blog yesterday http://bjwane.blogspot.com/

You can Pre-Order this book on Amazon by clicking on the link above or the book cover–it will be automatically downloaded to your Kindle at midnight on Friday, May 19th.  Also, this book will be FREE on Kindle Unlimited.  Enjoy this sexy excerpt:) and I’ll continue with another excerpt in two days.

Reaching for the tube in the warmer, he squeezed a liberal amount of sticky goo onto her belly. Her hips swiveled again. “Don’t get too excited. We’re not playing. I need to view your organs and take some samples this morning.”

“Will you be injecting me with that pain stuff?”

Xan sighed loudly. “I swear you do it to piss me off. The inhibitor. Words have meaning, and you are educated and intelligent enough to retain the formal names for my instruments and medicines by now.”

She pulled her lip between her teeth, wanting to only skate on the edge of disobedience. “Are you going to give me the inhibitor, Master?”

When Xan depressed the green button on the overhead light, and in response a cabinet on the far wall loudly creaked open a flat square disk about twelve inches by twelve inches slid from the metal compartment, floating toward the table then hovered over her body. He positioned it over her midsection.

“It’s not necessary until I’ve decided what samples I need today. When the time comes, yes, of course, you’ll receive the inhibitor. Now, lie still.”

“As you’ve said before. It’s really of no concern to me how you feel about my equipment. It is noisy, that’s all. You’re a big girl and can handle noise. What you can’t handle is the punishment for misbehavior. Yes?” He narrowed his eyes toward her in warning.

Xan slipped the large protective goggles over her eyes. “Ready?”

He depressed a button on the side of the disk, and instantly a probe became visible extending until it made contact with her now slippery skin. The machine reminded her of an ultrasound on Earth, but this one emitted a loud snapping sound as well as blinding flashes of light. Dr. Xan Breckett swore it was more accurate than ultrasound or x-ray, giving the doctors a clear and accurate picture of not only the organs externally and internally, but it also gave them snapshot pictures of the cell structures of each organ.

Within seconds of contact, the crackling jolts of light had her jumping. Her hands shifted, moving as low as her breasts before she caught herself and quickly moved them back to the metal bar at the head of the bed. The desire to protect herself was difficult to override.

The procedure wasn’t exactly painful, per se, but her skin twitched involuntarily at the impulses. She found the whole thing … distressing and unnerving.

Ganza and her master stared at the image floating in the air near her but turned enough she couldn’t see it. “It looks like there may be some cell formation in the liver.”

“I’m not sure. It may be for humans, but for Pra’kirians it’d be a huge issue. I’ll take some samples, and we’ll keep an eye on it.” His forefinger and thumb enlarged the screen, concentrating deeply on the image, he furrowed his eyebrows and narrowed eyes.

“Are you supposed to be speaking, little girl?” He didn’t even glance her way, continuing to stroke and swipe at the screen floating eyelevel for him.

“But nothing. You know the rules. I’ll address this later.” He brushed his hand over the image, quickly walked toward her, and depressed the button on the disk, causing the probe to retract back into the narrow box. “Your curiosity always gets you spanked. Will you never learn?”

“Is something wrong? You know why I’m worried.”

His face softened— briefly. Shuttering his eyes, and taking a deep breath before opening them again, he stroked her cheek lightly.

“I’m not to speak or question what you are doing. I’m to trust you.”

“Is it that difficult to obey? Really?” He pinched her chin between his fingers.

“Ow.” She whispered it, not wanting to call attention to how much it actually hurt his strength was obviously more than he realized. “I just…yes, I guess so.”

Grabbing a sterile cloth from a dispenser, he wiped the lubricant off her belly then pushed the scanner up and away from the table. “Roll over. Let’s take care of this.”

Hesitantly, she rolled over, her bottom trembling and clenching in anticipation.

“Soften your cheeks.” She relaxed her backside, and almost immediately his large, thick, and heavy hand loudly slapped her flesh, covering the whole of her bottom. It always amazed her how large he was—everywhere.

She’d tried to explain his hand was just as painful and large as a paddle, not that he really cared or took into consideration her feelings on the matter.

It only took a couple of swats before she was crying out and rocking on her hips to avoid his heavy blows. Just as she began to whimper, coming close to her limit, he halted her punishment. “You’ll lie still for the rest of this procedure, or we’ll be having a much more lengthy and serious discussion. Oh, and let’s not forget you will forgo your visitation today. Is that clear enough for you, slave?”

“Yes, Master.” Pulling in a shaky breath, she did her best to calm her frazzled nerves. She hated this machine and would find herself much more relaxed with the inhibitor.

“Ganza, let’s give her the inhibitor while she has her backside exposed.”

The cold swipe of alcohol brushed across her freshly spanked bottom before the plunger pressed into her soft flesh. The first thing noticed was the dissipation of pain in her backside.

Xan gently guided her to lie on her back once again. “Extractor, please.”

Ganza placed the instrument into his hand, and the cold probe rested against Blythe’s belly. Pressure could be felt, but, after the injection, no pain.

What continually surprised her was when the procedure would be done, there would be the absence of blood, incision, or even a puncture wound where the extractor took cells and tissue from an organ. Blythe desperately wanted to learn their methods, in the hope of sharing it with the medical community on Earth. So far, she’d been kept in the dark on the technology, but she’d continue to be diligent. During her education in anthropology, she’d studied not only the culture of the inhabitants of other planets, but also the technology and medicine of their societies. In most cultures, those two fields, as well as others, were tied to their culture.

“There. That’ll be it for today.” He handed the probe to Ganza. “Inhibitor, please.” She traded apparatus with him, the nurse taking the probe, along with some trays to the lab, putting the samples into the tubes before placing them in the cryo-freezer.

After rolling her up onto her hip, he injected her right cheek again. The sting of her spanking the first thing she noticed.

“Except for speaking out of turn, you were a very good girl today. Knees up, spread yourself wide, girl.” 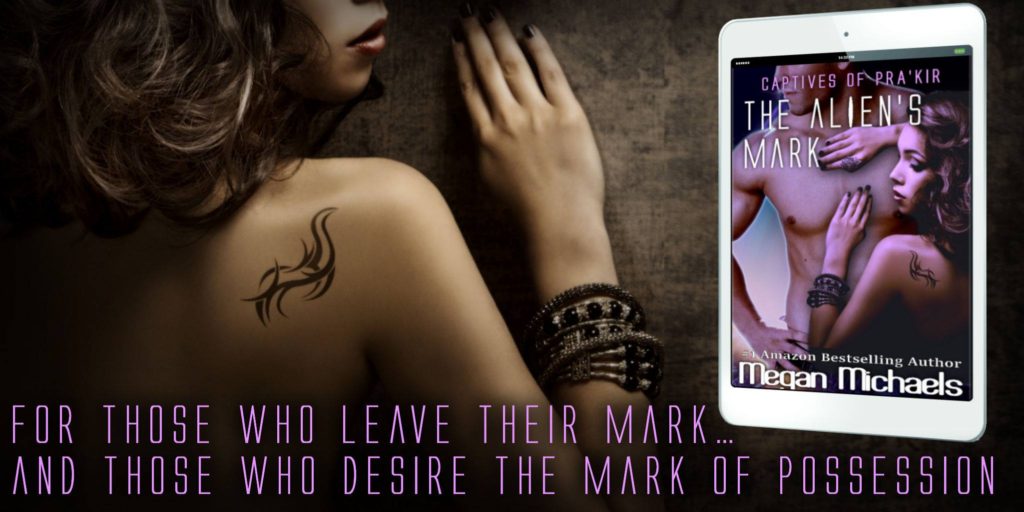 Cover and teaser made by Alyssa Hart of AllyCats Designs