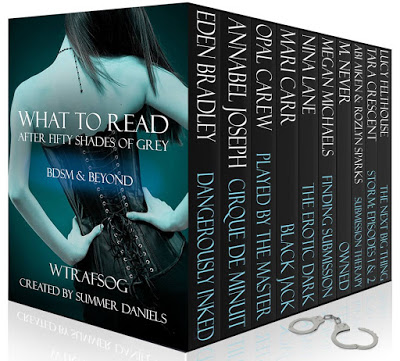 Welcome to WIP It Up Wednesday!  What To Read After Fifty Shades of Grey–BDSM & Beyond is live on Amazon and other platforms!  I have an excerpt from Finding Submission which has been included in this Boxed Set.  You can purchase it by clicking HERE for only 99 Cents!

I’m continuing with the excerpt I had on Six of the Best Sunday where Avery found Preston’s room and decided to experiment with a special saddle.  (If you missed it, you can read it HERE.)

Preston continued to slap the crop on her bottom in rhythm with her thrusts against the saddle horn, while with his other hand he gripped her breasts, squeezing, milking them through her clothing. Her nipples stood up prominently beneath the thin fabric of her tank top, and he pinched the hard nubs in time with each stroke of the crop, making her scream again with her second orgasm. He abandoned her breasts to slide his finger between the saddle horn and her pussy, seeking her clit, squeezing and milking through every bit of her orgasm. He kept cropping her bottom, her flesh nicely pink, until she finally came down from her climax. She moaned, tears coursing down her face as the pain finally registered, her arousal abating.
Preston dropped the crop on the floor, massaging her bottom until her moaning quieted somewhat. When she turned to look at him, he was gratified to see a little fear in those beautiful green eyes.
“You’ve been a very bad girl, haven’t you Miss Avery Rose?”
She chewed on her lip as her eyes brimmed with more tears. “I’m sorry. But I saw where you put the key and… I had to see.”
“No, you didn’t have to see. You chose to see. Chose to steal a key, and enter a room you were told you weren’t to enter. Is that correct, Miss Avery?”
Preston stopped the massage of her bottom, and pinched it lightly, demanding an answer.
“Yes, Sir.” She reached back and rubbed where he had just pinched.
“Come along, girlie. It’s time for your punishment for this.”
He put his hand around her upper arm, pulling her off the saddle.
“Wait! What? You just spanked me. You can’t spank me again!”
She pulled backwards, trying to break free from his hold.
“Avery, don’t make me drag you. What you just received was to bring you to completion. This spanking will be for breaking into the building and disobeying.” He raised his eyebrows when she still refused to move. She was definitely troublesome. “I can give you some well-placed swats to make you bunny hop to where I want you to go.”
To prove his point, he swatted her bottom three times in quick succession.
He pulled her toward the implement cabinet as she walked, almost dancing on the tips of her toes as she went. “And you’ll now get on the floor and drag that paddle out from under the cabinet.”
“Why?”
She was twisting her black tank top in her hands, standing with her shaved little pussy and pink bare bottom looking so sweet and fuckable. He resisted the urge to grab her by the ass, pull her against his cock, and grind himself into her belly. He had a job to do though, and he needed to show her that he was in charge.
“Why? Because it doesn’t belong there. You shoved it under the cabinet — I’m assuming so I wouldn’t use it on your bottom. But you were wrong, Miss Avery Rose, that large paddle is going to turn your little butt very red this afternoon. Now, get on the floor and get the paddle out from under the cabinet where you hid it, please.”
Avery got down on her knees and had to drop her head to the floor so see where it was. Preston moved behind so that he had a perfect view of her pussy and pink bottom. The lips of her sex were gleaming with the excess of her juices. Unable to resist, Preston bent over her and slid his finger down the cleft of her bottom, pressing his thumb on her pink rosebud, feeling her clench under the pad of his finger. He then slid two fingers into her warm sex, the slippery folds gliding over his fingers, making him wish it was his cock sliding through those moist lips.
Avery’s legs started to shake, and she rested her forehead on the floor.
“You’re a very responsive woman, Avery Rose. Men like that. You’re ready to fly apart with another orgasm, this quick after your most recent one.” Preston pulled out of her core, and loudly sucked her juices off his fingers. “But you’re not going to find your release now. Right now you’re going to get a long, hard paddling. Give me your paddle.”
“It’s not my paddle. It’s too big, and I don’t want it.” She shoved the paddle at him roughly, a scowl on her face.
“I’d watch my attitude if I were you, girl. You don’t want to upset the person in control of your punishment, do you?” Preston gave her a sly smile. “Follow me, sweetie.”
He brought her over to the pommel horse. “Climb up onto this.”
He put his hand over her pussy and helped her up to lie over the gleaming leather. He positioned her so her pubic bone was on the edge of the horse, then strapped her feet and hands to each leg of the pommel horse.
He patted her bottom lightly with the paddle. “Tell me why you’re getting punished, Avery.”
“’Cause I got caught!” She looked over her shoulder, her eyebrows furrowed.
Preston swung his arm out and the paddle landed with a loud splat on her bottom. Avery jolted on the horse, groaning between gritted teeth.
“Getting caught isn’t why you’re getting paddled. Try again.”
Avery moaned. “Mmmmmm, because I found your key and came into your sex playpen.”
I loved Avery, she was adorable and sassy as hell, and Preston loved every minute of it just as much as he wanted to paddle her ass for comments like above 🙂  If you would like to read more of this and the books from nine other authors, click on this link to Amazon and purchase it for only 99 cents!!
Click on the links below to read excerpts from the other others participating today!