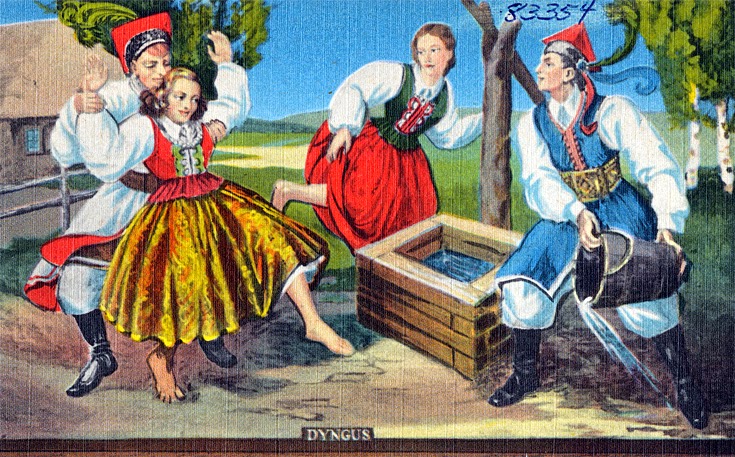 So Monday was Dyngus Day and I missed it!!

According to Wikipedia  “Śmigus-Dyngus (also known as lany poniedziałek, meaning “Wet Monday”)  is a celebration held on Easter Monday in Poland and traditionally on Dyngus Day:  Boys throw water over girls and spank them with pussy willow branches on Easter Monday, and girls do the same to boys on Easter Tuesday.”

Now my husband is Polish and English.  His mother’s family was full Polish and spoke the language fluently. On Easter we have a traditional Polish dinner–Bigos (Hunter’s Stew of sauerkraut and kielbasa), Pierogies (potato and onion, potato and cheese, sauerkraut, farmer’s cheese), and Swojska (double smoked kielbasa).  My father is Ukranian and they share the same traditional food as the Polish.  So we have quite the feast at our house followed by a traditional Easter dinner three hours later.

While we were purchasing our food at the local Polish store on the Saturday before Easter, they were telling us how there would be Dyngus Day celebrations on Monday, Easter Monday or known to the Polish as Dyngus Day.

I asked my husband what in the name of hell Dyngus Day was and per his normal, he said, “How the hell should I know, Google it.”

We didn’t remember to Google it until after our Easter dinner.  Imagine our surprise when my daughter read the above description to us all.  I laughed and said, “My God it is a spanking and a wet t-shirt contest!”

My husband started laughing as he was walking through the room, winking at me and saying “I think we need to start our tradition here at home.  I might have to go to the florist shop to get some pussy willows tomorrow.”  I swear I blushed.

“Boys would sneak into girls’ homes at daybreak on Easter Monday and throw containers of water over them while they were still in bed.[2] The boys would chant Dyngus, dyngus, po dwa jaja; nie chce chleba tylko jaja[3] (“Dyngus, dyngus, for two eggs; I don’t want bread but eggs”).[4]”

“After all the water had been thrown, the screaming girls would often be dragged to a nearby river or pond for another drenching.[2] Sometimes a girl would be carried out, still in her bed, before both bed and girl were thrown into the water together.[5] Particularly attractive girls could expect to be soaked repeatedly during the day.”

Can you imagine being thrown from your bed while sleeping and dragged in your damn bed to the river to be doused with water and spanked with pussy willows.  I know some of you are saying, that sounds like fun.  Then there are others, like me, who are saying, “Holy Hell, I am NOT a morning person.  You throw me in the river and spank me with a pussy willow, you better be able to run–and run fast–because I will turn into a clawing cat at that point.

“Their objective was to encourage the inhabitants to give them food from their Easter tables, such as Easter eggs, ham and sausages.[10] A typical Dyngus song went:

Your duck has told me
That you’ve baked a cake
Your hen has told me
She’s laid you a basket and a half of eggs
Your sow has told me that you’ve killed her son
If not her son then her little daughter
Give me something if only a bit of her fat
Who will not be generous today
Let him not count on heaven.[10] “

Well, all right then.  If a child came to my house singing that sad, depressing, and morbid little song I would give them ALL the ham.  Who wants to eat any ham after hearing it described as a sow’s son or daughter?

Did any of you get a spanking in your wet nightie or t-shirt Monday?  Or, thrown into the river?  If so, let me know!  If not, we have to remember to chase people with pails of water and pussy willows in honor of Dyngus Day next year! 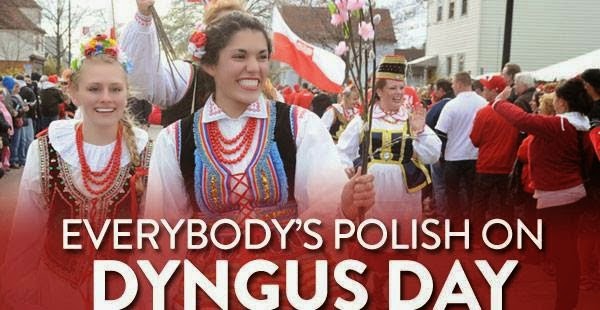