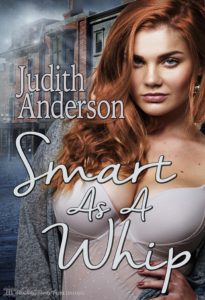 I’m so excited to have Judith Anderson on today with her new book Smart as a Whip.  This book is burning a hole in my Kindle as we speak.  If you haven’t read a Judith Anderson book, please click on the book cover above or on the link below to get a copy now!  You will not be sorry.   Here is a sexy excerpt to convince you 🙂

His fingers approached from both sides of her pussy and separated her lips. His tongue licking up one side and then around her clit and then down the other, again taking his time, like he was learning her, her reactions, the way she would move, moan and gasp, taking the time to figure out just what made her lose all control. Kimber closed her eyes. He was doing a very good job, but fuck, she just wanted him to lick her clit and make her cum already. On instinct, she reached down and pressed his head in her pussy and briefly, she felt his tongue on her clit and moaned loudly.

Then he pulled away.

She looked down. “What?”

Jeremy chuckled. “How about this? You hold on to the bars there on your headboard and I’ll continue. But if you should let go, then I’ll stop.”

“I’ll stop, get up, put my clothes back on and leave.”

Kimber let her head fall back on her pillow. “Really?”

“Well, sorry to disappoint you, but I can just call over someone else and let them finish the job.”

He nodded. “I have no doubt you could. But if I leave, you’ll have to wait about 20 minutes for someone to come over. On the other hand, you could just lay back, hang on to your headboard and enjoy what I’m doing right now.”

Kimber narrowed her eyes. Right now her clit was begging her to please, please, please just let him finish. “Fine,” she huffed, grabbing the headboard.

He smirked. His fingers glided along her wet lips, fluttering against them, causing her to shiver. His tongue followed his fingers, licking, teasing and tasting. She bucked her pussy against his tongue as her heels dug into the bedspread. Squinting her eyes while she panted, she just wanted him, she wanted him to lick her hungrily, to slide his fingers so deep inside her, to fist her and fuck her mercilessly. To take her. What he was doing instead was driving her fucking insane. He separated her lips again and licked around her lips, around her clit. Wordless pleading slipped past her lips. Her fingers flexed around the bars on her headboard, they tensed and her nails scratched against the wood, but she didn’t let go.

Finally, his tongue dug in on her clit, licking it up and down, flicking it side to side. She kicked her foot against the bed as her panting turned audible, She was so close…and he stopped and just blew gently against her wet lips. She shivered uncontrollably and would’ve cussed him for stopping if intelligible words were an option right now. He dug in again, making her arch her back and then the moans started again. He slowly slid his fingers inside her. She gasped as he thrust them deeper and hard into her while flicking her clit with his tongue. She tried to catch her breath, but couldn’t as bliss topped the last, building to a shattering crescendo. Her screams filled the air as she squeezed down hard on his fingers, feeling him lap up her sweetness as it spilled out of her, letting her cum over and over.

After what seemed like a wet, sweet, hot and exhausting eternity, he stopped. Her breath was shivering out of her, her legs fell limp against the bed, but she was still holding on to the headboard. Through the haze, she heard a zipper and pants fall to the floor at the foot of the bed. She felt him climb up her body from between her legs. And then he pressed his cock against her wetness. He was rock hard and wasn’t going anywhere, except he imagined deep inside her. Very deep inside her.

Coming close to giving up on her cherished dream of following in her father’s footsteps, Kimber Cassidy, a plus-size voluptuous beauty in her mid-twenties, jumps at the chance to clear the name of a family friend, Manny. There’s been a murder at a local BDSM playspace and Manny’s been framed for the crime. In order to keep an innocent man from spending his life in jail, Kimber needs to use the logical and analytical skills taught to her by her father, a detective with the East Alton police, who was killed in the line of duty when she was just sixteen.

Things become even more complicated when Kimber meets Jeremy, another club member who is as sexy as he is dominant. As she delves deeper into the world of spanking and bondage, she discovers her deepest dark desires, but will she get lost in them? Only by relying on her father’s advice, facing her fears, and realizing who she can trust and who she can’t, will she be able to keep a man from suffering for a crime he did not commit.