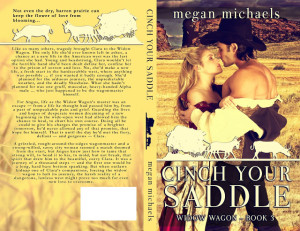 You’ve all been yelling for a while now that you want Silas and Minnie’s story for Widow Wagon.  It’s done and going through last minute changes and primping before I proudly display her for you all.   It’s been a great story—one I’ve enjoyed much more than I originally anticipated.

Minnie has some quirks that she retained after being kidnapped in Cinch Your Saddle, and Silas is more than happy to meet those needs and desires.  This is a consensual non-consent, moderately dark historical western–not something I’ve seen before, but one I had an absolute blast writing and can’t wait to share.  Here is a snippet of chapter one–and I’ll share more until it is released.

Minnie had startled awake to rough, callused hands squeezing her slim neck.  She could barely breathe, becoming dizzier as the seconds ticked by.

Where is my husband?

She needed Silas.  She tried turning her head to find her new husband, but the captor wouldn’t let her.  He knelt, a boney knee pressing into her back.

Is it possible this is one of the renegades?

She’d been captured by three renegades a few weeks ago, one of which was Silas, a US Marshall.  But she’d watched the two men go to jail and knew they wouldn’t be able to get her.

Unless they’d escaped.  Did they break free?

Before she blacked out from a lack of oxygen, she needed to kick this man off and wrestle herself away from him and scream for help.  Minnie had tried yelling earlier, but the lack of air and pressure on her neck prevented anything but a small gurgle from rising from her throat.

She bent her arm, raising her elbow, forcefully pounding it into her assailant’s ribs.

He groaned, shifting his body to slap her backside hard enough that it sounded like a gunshot in the quiet, dark prairie.

She stiffened momentarily reacting to the sharp sting, twisting her body, bringing her feet up to kick him—anywhere.  She didn’t care at this point where she injured him.  She would then run in search of Silas or Angus, the wagon master of the Widow Wagon. They’d save her.

A loud umph filled the air as her tiny foot met with soft flesh.  If it hadn’t been for the darkness, she would have seen who the villain was, but as much as she struggled, she couldn’t see anything.

He flipped her effortlessly onto her stomach, pushing up the flannel nightgown, exposing her bare bottom to the crisp night air.

Minnie clawed at the sheets and blankets, trying to crawl her way through the inky darkness to safety.  She bucked her hips in a desperate attempt to get away—to no avail.  It was then that she felt herself succumbing to the lack of oxygen, white stars appearing under her closed eyelids.  In one last ditch effort, she flailed her arms, screeching behind his hand tightly covering her mouth.

The now out of breath aggressor yanked her up onto her knees, leaving her bottom obscenely open to his ministrations.

In this position, she felt like a human sacrifice, exposed with a total loss of her will.  Minnie continued to fight, struggling against the fear of him taking her – forcing himself upon her.

The deep, rumbling voice whispered slowly into her ear.  “Minnie, sweetheart, it’s me.  It’s Silas.”  He released her neck, taking his hands from her face, lightly kissing the back of her neck, nibbling on her ear.

Silas.  Her husband, protector, and rescuer.

“Oh, God…I…I thought…Oh Lord.”  She gasped for air between her words.  She heard the rustle of material behind her; she looked over her shoulders to see his hard cock released from behind his pants.

Although Minnie had protested, struggling against his ministrations, she could feel her juices pooling at the lips of her pussy; she thoroughly rejoiced in his treatment.

Silas’s cock teased, pressing against her sex, gliding through her slick pussy.  Minnie pushed back, urging him to enter, her clit throbbing. His large hands cupped her dangling breasts; he plumped and squeezed them roughly, plucking her nipples, making them ache with need.

Minnie endeavored to move, wanting to lie on her back and see his face.

“Nuh-uh.  You stay like this—your captor wants to see your ass, taking you against your will.”

I’ll share more of this chapter with you tomorrow 🙂