More Than She Bargained For has been released!  We’ve all been anxious to see Daisy get her comeuppance and wondered who she’d end up with.  Noah Jensen is definitely more than Daisy bargained for and although he has some struggles with her, she becomes his good girl. 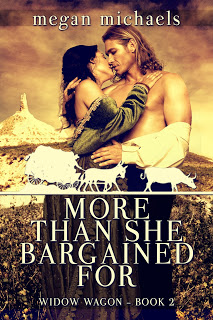 “You go to the corner and think about how you should’ve behaved on that wagon, when I call you over to me, we’ll deal with it.”
Noah watched her as she walked to the corner, a delightful wiggle to her plump bottom; he adjusted himself through his pants, his penis rock hard.  Angus definitely switched her little backside good, and though he was reluctant to admit it, those stripes made her ass even hotter.
He wouldn’t really have the heart to use a hairbrush on such already injured flesh.
Some corner time and the worry of a spanking would be punishment enough for her.  Her shoulders were stooped and she appeared to be a very sorry, contrite girl.   He shook his head–how had she been raised, that she still caused this much trouble?  At the age of eighteen, she should been able to hold her temper better.  He had a feeling she’d been coddled too much as a child.
She’d learn.