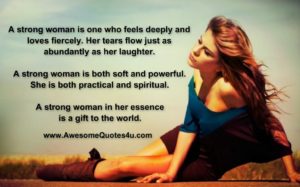 I’ve had this alphabet letter picked out for weeks.  I think it needs to be addressed.  In some circles, and even in the Author circle, people seem to have this belief that submission is equal to weakness. I don’t agree.  I know that there are women who are in the continuum that are very submissive and have a timid and placid spirit.  God, I’ve wanted to be that way.  I’ve even had spells in my life where I was that–but it was as an abused child.  As an adult I’ve tried to be that again, I just couldn’t. It’s not who I am.  I’m a fighter, I’m a survivor, I’m mouthy, and I’m …..strong.

My mother was trained by a strong woman, and I was also trained by a strong woman.  At twenty-one years old with two children under two, my mother was married to an alcoholic gambler seventeen years her senior.  She drank water to keep her milk production up to breast feed her newborn and made soup out of ketchup and one onion to keep her and her two year old (me) from starving.  We survived on that for two weeks until food could be bought again.  At twenty-seven she changed the locks, called the cops, and threw his stuff literally in the road and we were free of him.

You don’t live through things like that and not come out of it a stronger, completely changed woman.  Her daughters were completely changed too, believe me. Whining and crying were never tolerated.  We were told often to wipe our tears, no one cares. People who survived, didn’t cry; they picked themselves up and found a way to move forward. 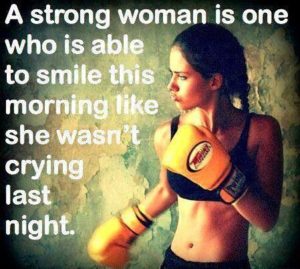 It’d been drilled into me most of my youth that we were women that didn’t need a man, men were to be utilized for a purpose–breadwinner, father, husband, fixing things in the house, meeting the demands of a woman, etc.  I know it sounds harsh–but it is exactly how I had been raised.

So when I started my career as an administrative assistant I went at it with a vigor unparalleled. By twenty-five I worked for a Director of a hospital and had become one of only twelve people in the State of New York in the grade title I was in.  I wore suits every day, worked with surveyors and auditors closely, coordinated corrective action plans, ran administrative medical officer meetings, supervised over twenty employees, and was a complete workaholic. And if I may say so, a force to be reckoned with.

The problem:  I always wanted to serve.  I served bosses, administrators, and boyfriends and loved it.  I loved waiting on people, bringing them coffee, serving lunches and dinners, and catering to people’s needs.  I needed to feel useful.  It drove my mother WILD!

My husband loved my strength and wasn’t intimidated by it–at all.  He also didn’t cave to it either.  It made me love him even more.  As time went on, I served him more and more–I then wanted to submit to him in more than just service.  I deferred to him, and asking him “What should we do” more and more often.  Gradually, he became head of household–at least in our version of This Thing We Do (TTWD).  This took place gradually over years. Most things in our marriage occurred that way. Gradual, step-by-step.

One day I brought him a piece of pie and what he said shocked me.  “When your mother is around, you don’t do things like this.”

From that day forward, I waited on him no matter who was around.  Including my mother.  I think until the day she died, she never made peace with it.  She took it as a personal affront.  I think she felt she’d failed somehow as a mother–somehow her daughter wasn’t a strong woman.

Why do people see serving and submission as weakness?  I’ve seen comments made on Facebook in this regard, even in author circles it has been stated that this is fake and not real. People see submission as the opposite of being strong.  The inference is—you’re weaker, timid, spineless, not opinionated, and the one I hate in particular, less intelligent.

It’s interesting to watch though, no one seems to notice that after over twenty five years of marriage we’re still happy.  We don’t just tolerate each other.  We don’t have separate bedrooms.  Adding the elements of D/s has enhanced our relationship and our marriage.  Purposeful domination and submission keeps our relationship at the forefront of our minds throughout the day–looking forward to a new implement, toy, or outfit keeps the spice going.  Submitting to a new rule or a new and devious humiliation pushes the mundane parts of our marriage out the window.

Call me weak, stupid,  spineless, or fake–none of those words matter.  What matters to me now–my husband, his domination, his rules, his implements, his techniques, his use of ‘good girl’ or ‘bad girl’, his discipline; and my submission, service, obedience, my hot, red ass, my pain, and my joy. 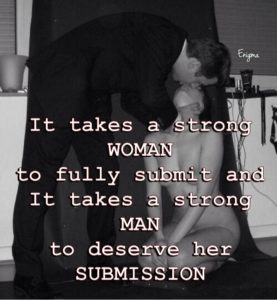