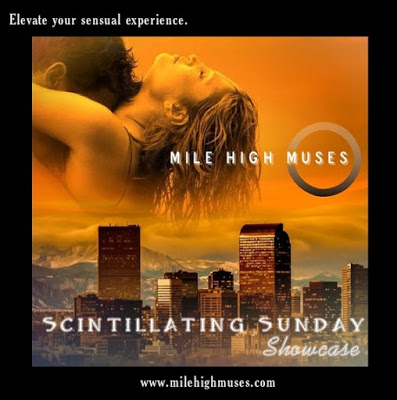 Welcome Scintillating Sunday fans!  Last week I shared a snippet for my upcoming book about a Russian Whip Master, if you missed it you can read it by Clicking Here

Today I continue with the same scene.  Caroline has just watched her favorite video on a spanking site and watched the “Russian Whip Master” as she calls him whipping a slave and she decides she needs some me time.

I’ll be doing a cover reveal next weekend, and it is anticipated that my release date will be 10/20 🙂

The whip became silent and motionless as the Master waited, waiting for her tremors to subside.  But expertly he knew when to start the whipping again to reignite the fire leading  to a new orgasm.   She whined and moaned, the resistance evident in the tone, unable to fight it, her arousal climbed,  her body quaking and writhing with her previous orgasm.
Her hips sensually circled, the lips of her labia brushing against her clit, hips pushed back seeking the cock that wasn’t there, seeking the whip—the sting, the burn, the pain timed with the incremental climb toward her release.
Crack, Crack, Crack.  Again, she shrieked, stiffening, the only movement –the tremors in her legs and the pulsating thrust of her hips. The woman groaned relaxing her back, her bottom pushed outward, still moving, her panting and groans timed with the clenching of her pussy.
Caroline expelled the air she’d been holding watching the video.  “Christ!  Look at me.”  Her own hips thrusting, her pussy clenching on air and desire.
She put the partially melted ice cream in the bowl on the coffee table ripping her sweats and panties off.  Her finger slid into the slick lips of her labia found her clit which, as she suspected, was hard as a rock.  She circled it with feathery touches, abandoning it quickly pushing her fingers into her sex  finding her g-spot while her other hand teased her clit.  She imagined the tall, Russian man lashing her ass while she knelt on a chair, hands bound to the ceiling.
Just like the video, he lashed her ass again, again, and again.  Her hips thrusting, circling and clenching, stiffening, and twirling until her body became taut, screeching with her orgasm.  Her fingers pumped her pussy, the whip cracked in the still air pushing her closer and closer and closer to the brink again.  She thrust her hips, her fingers bumping against her flesh bringing her to another orgasm.  Her  pussy milking her fingers, her body shaking and quivering with the remnants of her orgasm.
Slowly she opened her eyes, looking down, shaking her head.  Her pants had fallen off completely in the frenzy, she lay half sprawled, and half sitting on the couch, her legs shamelessly splayed.
She grabbed the flesh she referred to as her FUPA–fat upper pussy area—muttering aloud, “This needs to go.”  Tomorrow she’d hire a fitness chef and get herself back into shape.

Don’t forget to click on the links below to visit the other authors and have a great Sunday!