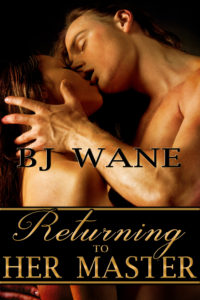 I have BJ Wane with her new book, RETURNING TO HER MASTER.  She has an excerpt for you all to read today.  If you haven’t purchased this book click on the book cover above or the links below to purchase your copy.

Thanks so much for having me today Megan.  I’m excited about reader’s responses to RETURNING TO HER MASTER.  Picking up where HER MASTER AT LAST left off with Marc and Cassie’s story, I have added over 4,000 words to the original version of this story in Make Me Yours as well as made significant changes to the plot.

Title:  RETURNING TO HER MASTER

Marc Taite is shocked when Cassie Edwards, the only girl he’s ever loved, suddenly shows up in the club room of his Colorado vacation lodge. Ever since she broke off their romance without explanation and refused to answer his calls, he has wondered what went wrong, and he hauls her upstairs, intending to spank her soundly and then get some answers. Their old passion instantly reignites, however, and instead of taking her over his knee he ends up taking her hard and fast.

The connection they once shared clearly still exists, but Marc has already lived through the pain of losing Cassie once, and he is determined not to let himself be hurt again. Desperate to prove that this time she is truly ready to belong to him, Cassie promises Marc her complete submission, and she soon finds herself on her knees with her bright red bare bottom on display as she begs him to claim her in any way he pleases.

Though he is reluctant to risk his heart again, when Marc discovers that a stalker has followed Cassie to Colorado his need to protect her quickly overcomes his hesitation and he takes it upon himself to keep her safe, even when that means punishing her sternly when she breaks the rules he makes to protect her. But when a misunderstanding sends her fleeing from him once again, will he lose her a second time?

There was no way Marc could leave her here alone. He’d never be able to sleep at night worrying about her. Her ultimatum pushed his buttons, her evasive response to his rude question pissed him off, but the small part of him that had never forgotten her, that had regretted losing the chance to finish what they’d started, urged him to give her what she wanted. The Cassie he remembered never would have had the nerve to challenge him the way she had tonight. That change alone stirred his interest, made him wonder how far she would go to get back into his good graces.

“Are you sure you want to submit to me again, Cassie? Do you know what that even means?” he asked her, his mouth damn near watering when her nipples puckered under her tee shirt, their pointed nubs more obvious because she wasn’t wearing a bra.

“I remember those nights at the club very well,” she answered, the look of lust entering his eyes sending a shiver of excitement up and down her spine.

“But we’re not in that club and you’re not naïve about what I want, what I expect anymore. Are you positive you’re ready and willing to go down that road with me again?”

His soft voice increased the shivers down her spine, but she wasn’t shivering from fear. Marc wouldn’t hurt her; she was convinced of that. “What do you want?” she asked, wishing he’d just take her over again, leave her no time to think, just feel.

Marc grabbed the small stool next to the counter and sat down. “Pull down your shorts and bend over,” he instructed, almost hoping she would refuse. Then he’d have a way out of this out-of-control situation. To his surprise, she didn’t hesitate to unbutton her shorts, push them down, and lower herself over his lap. He had dreamed of having her ass under his hand again these past two weeks, but his dreams hadn’t compared to the reality of having her plush buttocks bared and at his disposable.

“God, Cassie, you’ve got a gorgeous ass.” He couldn’t help praising her as he caressed her soft flesh.

Cassie kept her head lowered, biting her lip at the light touch of his hand. Her body responded to her vulnerable position and his stimulating caresses with a gush of cream between her legs. Not even when she was in a club wearing nothing had she ever felt so exposed, as vulnerable as she did now. He kneaded her cheeks and the tight squeezes had her shifting on his lap, a low moan slipping past her compressed lips.

“Please,” she whispered, ashamed of her need, but craving something more so bad she couldn’t help but beg. She’d waited so long for this.

“You beg beautifully, darlin’, just like I remember. Is this what you need?”

He landed a hard smack on her right cheek, raising instant, pulsing heat and she felt his cock harden even more. “Yes!” She could no more stifle her cry than she could prevent from lifting for the next swat and almost weeping with the pleasure sweeping her senses from the stimulating pain. His swats sped up, became harder, until he had covered her butt several times. Pausing only long enough to shove her shorts down further, he then aimed for her thighs, raising a throbbing burn along the tops before returning to her buttocks.

“I don’t like ultimatums,” Marc said, his hand smacking her again, the heat of her flesh reminding him of the warmth of her pussy when she clamped around him. “But I like less the worry I’ll have to live with each night if you’re here alone.” He spanked her twice right in the middle of her ass before dipping between her legs and running his fingers over her drenched, swollen folds.

“Sir,” she groaned, and even though he suspected the title slipped out without thought as she arched into his hand, it gave him a moment of unguarded satisfaction.

“I don’t think so.” Though tempted to give her an orgasm, pleasing her would not suit his purposes right now. Lifting her up, he stood and undid his jeans. With a sigh of relief, he freed his aching cock into his hand, those bright blue eyes filling with awe and unfulfilled desire nearly his undoing.

He managed to hold back by sheer willpower. “On your knees.”

CONNECT WITH BJ AT: