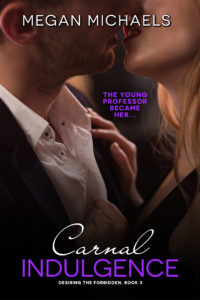 Soon Carnal Indulgence will be in your hands!  Until it is released, here is another sexy snippet for you.  Who doesn’t love sex in the kitchen or dining room?  Apparently, Daddy Maddox loves it too!

“Which is why I told you—clearly—to not talk to her? Don’t worry, my father will take care of my mother, he knows how to handle her—it’ll be an easier conversation with my dad and I participating.”

He dropped his head, shaking it in disbelief. “You know I can’t let this bit of disobedience go. It was your responsibility to obey. You were more worried about my mother’s reaction than obeying my directive. You should have been firmer, quickly ending the conversation. I won’t tolerate it.”

Maddox walked over to the desk in the dinette, opening a drawer, pulling out a legal pad of paper, plopping it in front of her with a pen. “I’m not spanking you; it’s not that serious. But you’ll write lines while I finish dinner. Then we will discuss, once again how we’ll approach my parents tomorrow.”

“Yes, Daddy. And thank you.” She touched his arm lightly. Maddox looked out for her, protecting her and doing his best to prevent stressful situations, she tended to be the biggest obstacle to his goals. It had taken four years to get her to this point; she figured another four years and maybe she would go for longer periods with no punishment—she hoped.

“Always, sweets.” He kissed the top of her head, grabbing the pen, writing:

I will always obey Daddy, even if others become angry.

You’ll write this sixty times. The next time this occurs, you’ll know how to respond, or you’ll find yourself over my lap.”

He turned to walk toward the kitchen, only to stop, pointing toward the floor. “Oh, by the way, stand up, and drop your pants and panties to your ankles. It’ll keep you focused. I’ll lock the doors, so Brandon doesn’t come through unexpectedly.”

Libby hated directives like this. They were the type of orders that got her into trouble—every time. She knew that she should immediately stand, letting them puddle to her feet, but it felt so damn childish and humiliating that she cringed just thinking about sitting on her bare bottom on the hard wooden chair.

“Do you need incentive, babygirl? Take them off, Elizabeth. Now.”

His voice dropped to a lethal growl, spurring her into action.

She stood, undoing the button and zipper on her dress pants, shimmying them over her backside and hips, letting them drift down her legs, hooking her thumbs into the skimpy thong, dragging it to her knees.

Maddox stood fixated, staring at her bare pussy, he groaned deep in his throat, walking up to her. “Good God, you look so beautiful.” His large, hot hand cupped her moist sex, his finger gliding through the slick lips.

She may have resisted before, but didn’t hesitate this time to run her hand over his cock, the heat of it felt through his pants. She pressed on it hard, smiling when he hissed between his teeth. Then taking just one finger, she slowly skated along the long length, lightly brushing over the head and ridges.

Maddox’s body trembled, grabbing her roughly, grinding against her mound. She grabbed his ass, pulling him tightly to her. Their breathing took on a fevered pitch, as did their movements. His large hands grabbed her thighs, pulling her up to straddle his waist. He laid her gently on the kitchen table, tossing her pants and panties onto the floor, leaving her in a flimsy peach colored blouse and her killer black high heels.

He undid his dress pants, shoving and yanking them down, his hard cock bobbing in front of him. Maddox wrapped his hands around her spiked heels pushing back on them until they were pressed against her ass, knees up and her pussy spread open—puffy and moist ready for him. “Hands above your head, bad girl. No hands and no kissing tonight, that’s for good girls.”

Initially, when they had started dating, she had hated that directive—and some days she still did. More than not, she found it hot, loved the denial with the sexual tension, her breasts pressed upward with her hands stretched above her—open and vulnerable, watching him intently without the distraction of kissing, the searing need and want to overcome her.

Maddox’s hot, turgid member pressed against her labia, not entering but teasing, gliding, poking, driving her mad with desire. She lifted her hips, groaning in frustration, his chuckle bringing her gaze back to his face. The muscles in his face taut with restraint and sexual need also.

“Are you ready for your fucking, bad girl?” His cock pointed upward above her pussy, her clit throbbing in anticipation of it impaling her. “Yes, please!”

It won’t be long before this sexy spanking and wedding romp will be available, and you’ll be able to read the rest of this!! 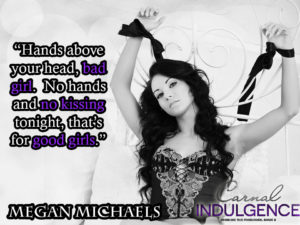 Don’t forget to put Carnal Indulgence on your bookshelf at GoodReads:  https://www.goodreads.com/book/show/30829246-carnal-indulgence