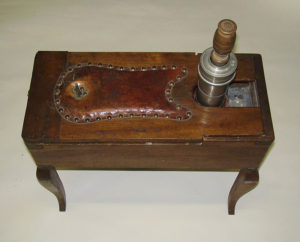 When I left you last, Minnie and Silas had gone to Doc’s office to purchase a clyster and were shown this enema bench.  I love the Victorian era, they just had some of the best items–and this is one of them.  I had a blast writing this, hope you enjoy it.  Warning:  I’m going to leave you hanging a bit…..

I should be doing a cover reveal this evening or tomorrow morning.

I’m going to fucking kill him.  But first I’m going to shove this up his little asshole.  Then I’ll kill him.

“Minnie, you need to fix your thinking and behavior now or you’ll be receiving a spanking after your enema.”  Silas shut the door behind them, placing the stool on the floor in front of her, his hands on his hips.

Minnie took a deep breath; she didn’t want her temper to get the best of her, but this—this—was more than she could handle.  Her little southern mother would faint if she could see this public humiliation.

“Drawers off.  Hand them to me.”  Silas stood with his hand out, not wavering in his decision.

“Girl, how long I spank you depends on how much you fight me in this office.”

Silas blurred in her watery gaze.  “Yes, Sir.”  She untied her drawers that had pink ruffles at the knees and waist.  They fluttered to the floor, puddling at her feet.  She stepped out of them, placing them in his large, outstretched hand.

He wadded them unceremoniously into his pocket, and it made her want to scream.  She treasured her new drawers, and he treated them like nothing more than a dirty handkerchief.

“Lift your skirts and kneel on the floor with your knees shoulder width apart.”

“This is just…vile.  It’s vile…and evil.  I think a man came up with this contraption.  No woman would make something this humiliating.  Ever.”

Minnie gathered her skirts at her waist while she was talking, not totally defying him, but being sassy during her submission.

“And that is ten swats with your hairbrush.  I’m pretty sure a doctor came up with this to help people with ailments, but a husband with a sassy, misbehavin’ wife probably decided to use it for punishment.  And I have to say, the idea is sounding better and better as you speak.  Now, kneel.”  He held her arms as he helped her kneel on the floor.

Walking behind her with the stool in his hands, he squatted on the floor.  “Lean forward a bit, girl.  Knees wider.  Wider.”

She spread her legs as wide as she could while leaning forward, holding her skirts without feeling like she’d fall on her nose.

Definitely the invention of a bored, angry husband!

The silence went for too long—uncomfortably long.  Minnie looked over her shoulder to see Silas’s dark gaze riveted on her ass, the bulge between his legs now very prominent.  “Silas?”

“My God, I may decide I have a new hobby—sitting in a chair with this stool between your legs, ass up, buttocks spread with all your charms exposed to my view.  I swear my balls feel like they’re going to burst.”  He slid his finger from her dusky bottom hole easing between her labia to circle her clit.

“Uh-uh, don’t move.”  His tongue slid between the lips of her sex before he lightly blew on her clit, easing his way up to blow on her little hole.  “Jesus.  This is definitely my new hobby.”

He slid the stool along the floor to situate it between her legs.  “Don’t move.  Let me lubricate your little pucker.”

“Oh God.  Do you have to call it that?”  She moaned with her embarrassment.

“Would you prefer I call it your little back hole, your asshole, or your dark channel?  Personally, I like how your little pucker sounds, and since I’m in charge, and the one with the lube and the nozzle, I think I’d be agreeable if I were you.”

I hope you enjoyed it — I’ll be sharing my cover and blurb soon!!