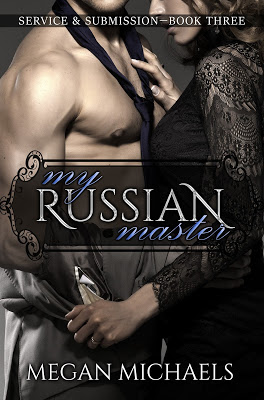 MY RUSSIAN MASTER IS LIVE

As most of you know, My Russian Master is live on most platforms (we’re still waiting for Barnes & Noble and iTunes/iBook).  If you haven’t bought your copy you can click on the picture to the left or the links below to purchase your own. It is $2.99 — but only for today.

In today’s excerpt Caroline is receiving her first “bad girl” spanking from Maxim.

Sometimes the road to happily-ever-after begins with two simple words: “Yes, Sir.”For CEO Caroline Turner certain truths were inescapable. No matter how
powerful, successful, and pretty she was, it didn’t matter when it came
to the number on her scale — a number she wasn’t at all happy with.
Like every other obstacle in her life though, she had a plan for
overcoming it. The famous Maxim Volkov chef and fitness expert wasn’t
cheap, and he wasn’t exactly falling in line with her wishes either, but
he was perfect for the job … and extremely easy on the eyes. However
alpha and devastatingly handsome the taciturn Russian might, he seemed
to have a different understanding about who the boss was in their
particular arrangement. She’d just have to put him in his place… and
try to ignore the insane urge to kneel at his feet.Taking the job offered by the spoiled, if intriguing American CEO was something
Maxim wouldn’t normally do. He didn’t need the money, and he usually
found Western women trying at best, maddening at worst. But something
about the pretty Caroline spoke to him, her defiance, and acid-tongued
ways hiding an appealing vulnerability he longed to bring to the fore.
Despite her self-image, he saw little wrong with the curvy, brunette
beauty. Nothing wrong that is that couldn’t be cured with a little
strict, bare bottom discipline, and some loving, sensual aftercare. That
the appealingly disobedient, mouthy American woman would surrender to
him was never in doubt.

But behind Caroline’s strong, professional facade, something else lurked, a
part of her painful past that threatened to endanger her future — and
perhaps her life. Hiding his own potentially explosive secrets, Maxim
must help her finally put that dark chapter behind her — no matter what
it took, no matter how much she might fight it, no matter how much it
hurt. Worse, hated competitors, circling like sharks, threatened to
destroy all that Caroline had worked so hard to create.

Strugglingwith demons both internal and external, her last, best hope might just
be a man as hard and implacable as a Siberian winter…