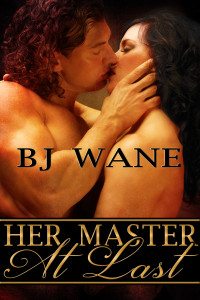 I have BJ Wane on with her new book, Her Master At Last!  I love this book, please make  sure you add this to your library– you won’t be sorry.  Trust me!

Over the years since she first met Jack Sinclair, Morgan Tomlinson has developed quite a crush on him. As a girl she swore she would marry him one day, and as a twenty-seven-year-old woman with her life seemingly spiraling out of control she rushes to him for comfort. When she ends up stranded at his mountain retreat during a snowstorm, Morgan knows this may be the best shot she will ever have to make Jack see that she is not a little girl anymore.

Though he is well aware that Morgan has grown up to be a beautiful woman, Jack is a demanding man with particular tastes which he fears would be too much for her. She proves determined to test him, however, and when she disobeys him one too many times Jack decides it is time to take Morgan in hand.

By the time she realizes she has pushed Jack too far, it is already too late, and before she knows it Morgan has been pulled over his knee for a painful, embarrassing, and very public bare-bottom spanking. Though the humiliating punishment shocks her, it also excites her in a way she has never felt before, and despite her blushing cheeks and sore bottom Morgan cannot help longing for Jack to master her completely.

Impressed by her response to his stern chastisement, Jack sets out to teach Morgan what it would mean to truly belong to him, and with each passing day she surrenders her body more fully to his practiced dominance. But when her wealthy, snobbish family seeks to destroy her blossoming romance, will Morgan run away from Jack as she has run away from so many things before in her life, and if she does, will he chase after her and fight to keep her?

In this scene, Morgan had just irritated Jack by pelting him with snowballs after he told her he was too tired to engage in a snowball fight with her.

Jack undid her jeans with quick, deft fingers, shoved them down and pulled her over his lap as he sat down. “One guess as to what I’m doing.”

“Damn it, Jack, it’s freezing out here!” she complained, all humor having fled when she realized his intentions. “Let me up! What if someone sees?”

Chuckling, Jack landed a hard swat on her ass. “Wouldn’t be the first time. Don’t worry, I’ll give you a quick warm-up.”

Cold and embarrassed, more so when she saw Marc pull up and he and two couples took their time unloading their skis while Jack peppered her wriggling ass with swift, hard slaps. As usual, it took only moments for the pain encompassing her buttocks to turn her on. Cursing, she turned her head away from her grinning audience and quit struggling. True to his word, his ass did warm quickly under his hand until her cold buttocks burned, each smack a little harder, each response a little more needy. Her mortification knew no bounds as she pictured herself all bundled up against the cold with only her white buttocks naked and on display. Having her butt bare left her more vulnerable and exposed than if he had stripped her naked. At least then, she wouldn’t know what part of her body people were staring at. Imagining what her ass looked like added to her embarrassment, but the heat and pain from Jack’s unrelenting, hard hand aroused her nonetheless.

“Poor baby,” he crooned running his hand over her warm, red cheeks. “You do feel a little warm here. But, since you’re being punished, it wouldn’t be prudent of me to reward you with an orgasm, now would it?” Even as he said that, he ran his fingers in a light caress over her dripping slit before entering her just far enough to feel the tight clasp of her slick walls.

“But,” she protested, twisting to glare up at him, “You enjoyed our snowball fight, and, you won!”

“Still, I was tired and cold and didn’t want to play right then. But you ignored my warning to stop. Now that I’ve warmed you up, I think I’ll cool you off again.”

Remembering the ice on her nipples, Morgan cringed as she saw him reach behind him, just outside the gazebo, and scoop up snow. “No, Jack!” she cried out while trying to roll off his lap, but he was too fast and too strong for her.

Relishing his immense enjoyment at her expense, Jack grabbed her around the waist, held her down and rubbed snow onto her red, squirming buttocks, her curses ringing in his ears. A few more hard swats on her snow-covered ass increased her struggles and complaints but several more and his threat to continue until she stopped had her lying in a docile heap over his lap. Taking pity on her shivering form, he let her up, pulled her jeans over her wet, sore ass and grinned up into her scowling face. “All done, Princess.”

[pullquote align=”full” cite=”” link=”” color=”” class=”” size=””]“Don’t you ‘princess’ me you big jerk. My ass is sore and freezing and you owe me an orgasm.” Turning, she stomped into the lodge, ignoring all of them[/pullquote]

Trust me on this, you will LOVE this book.  Click on this link to purchase your copy.

You can be friends with BJ Wane on Facebook