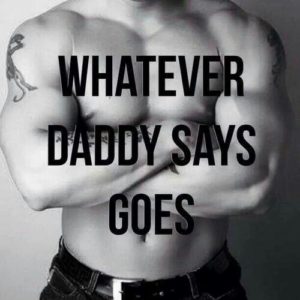 Today I’m sharing the rest of the punishment scene with Daddy Maddox and Libby– when we stopped Maddox was watching her stand with her bare bottom in the corner,  the cane held between her cheeks.  Let’s see how things have progressed.  My title and cover reveal will be this week!!  I can hardly wait to show you all!

His cock lengthened, and he decided that he’d rather be naked, standing to disrobe. They would order delivery tonight, eating in bed if necessary. Her kids were old enough that she didn’t have to handle their dinner needs anymore. At eighteen, Brandon was a senior, and Alexis, at twenty, was away at college.

Maddox stood in only his boxers, slipping them off, freeing his hardening cock. He grasped the silky steel rod in his hand, stroking it lightly as he approached his soon-to-be-wife. He liked to refer to her that way. His wife. There was a power and ownership to that phrase, yet he was smart enough to know that he never truly owned her any more than she did him. However, having her kneel and call him Daddy or Sir had him swelling with more than just pride.

He pushed his penis up against the crack of her ass, pressing the cane deeper into her. Maddox gripped her hips with both hands, rocking on the soft flesh jammed against his groin. “Time for a few tracks on this white bottom. Maybe sitting with a constant sting tomorrow will remind you how you speak to Daddy.”

He grasped the rod in his hand, lining it up for the first crack. He snapped it against her flesh several times in succession, each stripe just overlapping the one before.

Libby rose up onto her toes, dancing on the balls of her feet. “Jesus!”

“It hurts, doesn’t it? Tomorrow, it will hurt more, bad girl.” He lightly tapped her bottom for the next strokes. “Six more, girl.”

He snapped his wrist three more times, laying the strokes along the lower edge of her bottom, just above her sit spots.

Her voice broke at the last stripe, and he could tell she was near the brink of tears.

“Are you supposed to call Daddy an idiot when he doesn’t know the difference between silver and slate for an invitation?”

“The next three will make sure you are sorry while sitting at your desk chair in Human Resources.”

Maddox made sure to swing harder on the next three, wanting them to hurt the most. She was never allowed to call him an idiot—and he’d wanted to make sure she didn’t forget it. Two months was a long time to live with a shrew, and Maddox would be damned if he’d tolerate it for even one day, let alone sixty. He paused between each snap of the cane, letting the sting settle before striking again.

By the time he’d finished, her bottom was angry with red stripes—each outlined in a light purple. He placed the cane upright in the corner, lightly rubbing her bottom. “You have one more thing before you’re a good girl again, Libby. I want you on your knees, sucking my cock.”

She stood—her cheeks and nose bright red, her hand swiping at her tears. Libby didn’t balk or hesitate, dropping to her knees. She gasped, her eyes widening when her ass met her feet as she knelt.

He hated seeing her in pain, hated seeing the tears and pout on her lips. Maddox also knew that his Libby was about as stubborn as they came, and unless she sat on a sore rump for a day or two, she’d do it again and again—until the next time he paddled her bottom. He’d tried being gentle and forgiving with his girl; her nature was so sweet and kind. However, Libby seemed to learn best with harsh discipline, and since Maddox had a penchant for strict discipline, he never hesitated to administer just what she needed.

“Hands behind your back. Don’t move them, or you’ll be spanked and bound.”

Her wide eyes looked at him, and she nodded slowly, clasping the long fingers behind her. He wove a hand in her hair, using the grip to direct her, his other hand slipping his long cock into her waiting mouth. Her lips sealed around him, and she took him deep into her throat, her gag reflex pressing him against the roof of her mouth.

“Jesus!” Maddox couldn’t contain his groan as he slid down her slender throat. He eased out and she licked him, circling the head with the tip of her lovely tongue. Libby gave him a crooked smile as she flicked the tip with short, fast strokes that had him wanting to pound into her face once more. He restrained that primal need, though, relishing extending the ride to his climax.

Her tongue followed the underside of his cock, licking his balls slowly and then gently sucking them into her mouth. She softly rolled them around, serving the sensitive flesh with her tongue. Libby backed away, letting them slip out, blowing on the delicate, wet sac. His hips thrust, his dick bouncing off his lower belly. Maddox growled, grasping the hair on either side of her head, jamming himself into her with such force that she gagged loudly, rising up on her knees, trying to shorten the depth of his thrusts.

He slowly, languidly, fucked her mouth, easing himself further and further into her, his thighs trembling, his spine tingling with his upcoming orgasm. Libby tightened her lips around him and pulled, causing a suction so strong on him that he swore his eyes crossed his semen gathering. Maddox growled deep in his chest, jamming his cock hard into her throat, his seed bursting in steady streams. He pulled out, letting her catch her breath, then slowly eased himself back into the dark channel, making her take the very last spurt.

With his eyes closed, his body dripping with sweat, he trembled as he struggled to recover. Libby licked him dry with short quick strokes and long, slow drags of her tongue along the length of his shaft. Finally, he’d recovered, and he realized that she was quietly watching him, cupping and playing with his balls, stroking the wiry hair there, kissing his now semi flaccid cock.

“I love you too, baby. Let’s take a nap and then we’ll order some takeout.”

“Oh, thank God. I don’t think I could cook dinner if I tried.” She giggled, flopping into bed next to him, laying her head on his chest. She fell asleep almost immediately.

Maddox lightly traced the track marks on her bottom as she slumbered. The tram lines still felt hot to the . He loved feeling them under the pad of his finger, and he reveled in the power and sadistic pleasure of being the cause of her cane stripes. Maddox took pleasure in knowing that she’d remember him because of the burn that permeated her consciousness the next day. Libby would remember him, thinking about the dominance he had over her, respecting his authority and discipline.

She’d soon be his wife. His love, carrying his name.