Today I am hosting the wonderful women who wrote the five book series, The Sons of Johnny Hastings.  I read this series this weekend and was blown away.  It was truly impossible to choose which book was the best.  If you love cowboys and if you love cowboys who spank, this is a must have for your Kindle!
The Sons of Johnny Hastings are on a fast-paced, busy blog schedule and if you enter a comment on each blog on the blog tour (click here for the schedule of blogs) you will be entered  to win a $50 Blushing Books gift card or a $10 Amazon Gift Card.  For each comment you leave your name will be entered into a drawing for our prizes.  The more you visit and comment, the better your chances of winning.  (Winners announced on July 4th)
Have you marked that you are going to the Sons of Johnny Hastings Launch Party?  If not click HERE for the Facebook page and enter that you are going, Thursday, June 12th 8 pm to 10 pm. 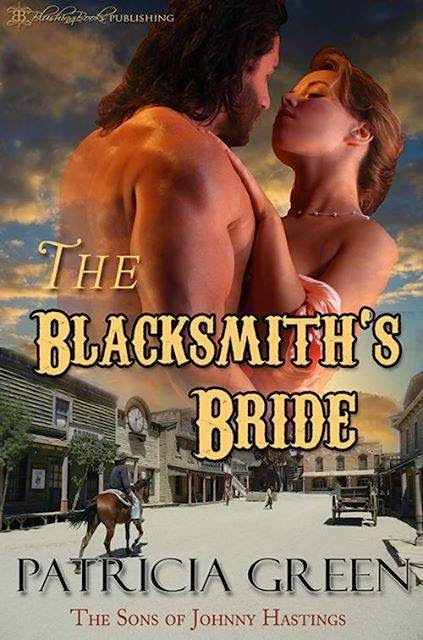 The Blacksmith’s Bride by Patricia Green
Sunny Winslow knows exactly what she wants in a man. When she meets the blacksmith, Abel Armstrong, in her new home she’s immediately hooked. Unfortunately, her mother has other plans for her that do not include a blacksmith. She is determined to tie Sunny to a rich town counselor. Sunny is desperate to escape the counselor, so she embarks on a series of schemes to get the man she wants.
Abel Armstrong has some skeletons in his closet. In the late 1800s, it’s quite the scandal to be a divorced man. Over the course of the last ten years, he’s had to work very hard to get his reputation back. Meeting Sunny is like a breath of fresh air, but he can’t afford to throw caution to the wind and force their joining by doing something disreputable.
Can spankings teach Sunny to have some patience and trust that Abel’s way is the right way? And, can Abel deal with Sunny’s impulsive scheming and keep his standing in the community intact?

The Lawman’s Lessons by Patty Devlin
Choose one of the two men, or take the return ticket and head home. It wasn’t much of a choice. Celia had worked and studied so hard to have a school of her own. And she had known that they might be a little upset. She knew exactly what they had wanted. It was stated very clearly in the advertisement and she could probably read and write better than anyone one of them.
Jackson sure never planned to marry, and how could he when his name would be a disgrace to his bride? So why had he fought so hard to keep her from marrying the other man? He could have shrugged it off and gotten out of there, but he just couldn’t do it. The new school teacher needed someone who would stay on her tail and teach her a lesson or else she’d run right into danger.
But, he’d have to be honest with her and tell her about that no good scoundrel who had sired him. She at least had a right to know he was a bas—illegitimate, that the man who fathered him had left his mother alone to fend for herself. Then if Celia could handle that, well, they could work the rest out. Besides, there weren’t any other good choices and she simply couldn’t be without a husband. 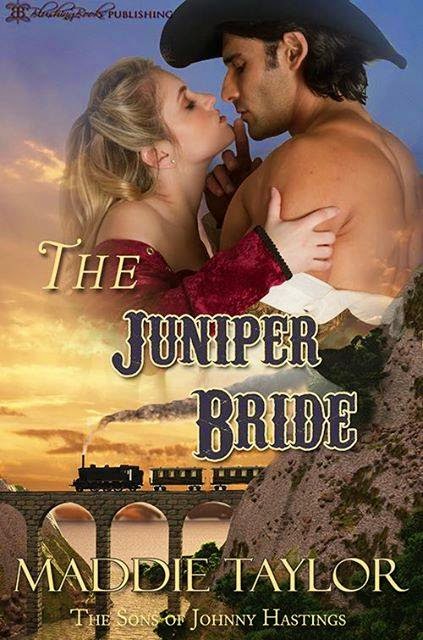 The Juniper Bride by Maddie Taylor
Emmalee Gray watches in frustration as her fiancé, Clinton Ryan, boards a train heading west. Told to stay behind and prepare for their wedding as Clint embarks on a mysterious errand, Em has other ideas. She doesn’t want to remain home without him, especially with her witch of a stepmother and a father who barely knows she exists. She’d much rather risk Clint’s wrath and follow him, planning to stay hidden until she gets so far away from Boston he wouldn’t dare send her back alone. Then she can enjoy some private time and maybe a little adventure with her gorgeous fiancé, in advance of their nuptials.
Unfortunately, Emmalee is a magnet for trouble and finds herself in one scrape after another. To keep her safe, Clint lays down the law: obey his orders or suffer the consequences over his knee.
Can they make it to their destination in one piece? When they do, and Clint’s past is revealed, how will Emmalee react, and will she ever find out why people keep calling her a “juniper bride?” With danger and intrigue swirling around them at every turn, can their passionate love survive?

To Have and To Scold by Mary Wehr
Annie’s sweet on her neighbor, Matthew Caine, but the stern rancher treats her like a bratty child instead of a woman. Each encounter always ends with a trip over his knee.
Matthew’s fed up with Annie’s childish behavior. Her latest prank ruined a brand new pair of boots! While he sets her britches on fire, he refers to her as a nuisance and warns her to leave him alone. For once in her life, Annie obeys.
‘Bratty’ Annie has grown into a beautiful woman and Matthew realizes that he’s fallen in love with her, but she’s unsure of his feelings. When he learns about her stepmother’s evil plan to marry her off to a man Annie despises in order to settle a debt, he steps in and takes her to wife.
Annie’s happy to be married to the man of her dreams and learns that no matter what her age, her disobedience and sass will be dealt with an old-fashioned spanking. The Outlaw’s Bride by Renee Rose
Mabelle Lawson had been managing her dead sister’s ranch without help for three months. The last thing she needs is a band of outlaws showing up and pushing her around. The Curly James gang members have no patience for her sass, and when their leader attempts to strike her with his fist, one of his men volunteers to spank her instead. She wants to hate the good-looking outlaw, but he seems to have her well-being at heart, even risking his life to protect her from the other men.
Unjustly accused of murder, Sam Pride is on the run and his luck worsens when he tangles with the Curly James gang. The only bright spot is the little spitfire rancher who steals his heart with her courage and spunk. When the two set off together for Cheyenne and then Denver, sparks fly and their magnetic connection grows.
Still, Mabelle is not sure if Sam will commit and even if he does, can he clear his name before a bounty hunter shoots him or brings him in?

7 thoughts on “J = Johnny The Sons of Johnny Hastings #SpanksA2Z”