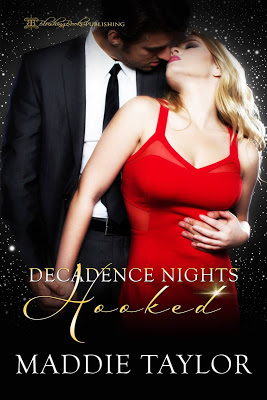 I have Maddie Taylor on for the second time in a month because she has had two releases in that month!!  She’s been busy!

Thanks for
having me back so soon, Megan.  Two
releases in one month is kicking my tail, but you know I love it.  Today, I’m sharing from my latest addition to
my Club Decadence collection.
Hooked (Decadence Nights, Book 1)
Whether you’re
an old friend who’s looking for more of those sexy Doms, sassy subs and can’t
get enough of the exciting, sensual, kinky type play that you are used to
finding at Club Decadence, or if you’re a new “club-curious” visitor
thinking to make Hooked your first venture into the best damn BDSM club in the
southwest, either way, you’ll find what you’re looking.
With this first
of many exciting Decadence Nights stories, I’m confident you’ll be
Hooked.
The setup:  Legal secretary Olivia Wright has resigned
herself.  Her boss, Joseph, is simply not
into her.  She secures an invitation to
Club Decadence.  When her experienced
escort is a last minute cancellation, she boldly proceeds and goes in alone.  As she enters the club for the first time,
clearly in awe, one of the Decadence Masters takes her under his wing.
*****
Master
Sean turned to Livvy. “The show starts any minute, little sub. Best head on
in.”
He
strode to the door and pushed it wide, holding it open for her. His gaze shot
behind Livvy, then came back. “No girl crew for moral support?”
“No,
Sir, I’m alone. I was supposed to meet someone here, but she had to cancel at
the last minute.” David would be furious if he found out she’d gone on by
herself, but she didn’t plan on that happening.
“Let
me find you a friend,” the beautiful, muscular man offered. As they stepped
inside, his vibrant blue eyes, not sky blue like the other, but just as
compelling, scanned the crowded room. Suddenly, he grinned. “This way.” He was
speaking loudly to be heard over the band who had just begun to play and the
crowd that was cheering wildly. “What’s your name?”
“Olivia,
Sir.”
He
wrapped his hand around her wrist and pulled her through the throng of people.
It seemed more like a concert than a sub mixer as she assumed it would be. At a
table up front, he stopped behind a stunning redhead in an off-the-shoulder
black dress. He wrapped her long ponytail around his wrist and pulled her head
back until she was looking up at him. Livvy noticed the huge smile on her face
before Master Sean’s lips lowered and he devoured her mouth.
After
several minutes, he raised his head. “I brought you a guest, nightingale.” He
pulled up a chair and seated Livvy. “Olivia, this is my sub Mara. She’ll keep
you company until someone claims you.”
“She’s
lovely, Master,” the green eyed beauty said, her cheeks flushed and slightly
breathless from the impassioned kiss. She still managed a friendly smile. “My
guess is that won’t take very long.”

Buy links:
AMAZON
BLUSHING BOOKS
BARNES AND NOBLE
The Blurb:
Thirty-eight-year-old
legal secretary Olivia Wright’s clock is ticking and she’s afraid she’s running
out of time to find Master Right. Several times she thought she’d found the Dom
of her dreams, but instead of the prince she sought, he’d turned out to be a
slimy toad. The last one had dumped her unexpectedly and nearly broken her.
Now, after a long dry spell, she’s ready to try again. She’d really like it to be
with the man who’d caught her eye three years ago, but that man is her boss and
despite her best efforts, and tightest skirts, he hasn’t spared her an extra
glance. Resigning herself to unrequited love, she attempts to move on,
procuring an invitation to an exclusive BDSM club, hoping Club Decadence will
be the answer.
Joseph Hooks
isn’t your typical Dom. He’s NBA tall, with no police or military background to
speak of, wears tweed suits, of all things, and on an occasion the dreaded bow
tie. But behind his somewhat nerdy appearance is a handsome, green eyed, strict
but sensual dominant who’s also hell on wheels in a court of law. He’s wealthy,
powerful, successful, and enjoys popularity among the subs at his private club,
at least those who don’t flee from the swishing sound of polished rattan, but
he’s exhausted his search for his perfect submissive and concerned about coming
up short. After a frustrating day of watching his gorgeous secretary’s
delectable bottom in an incredibly tight skirt, he heads to San Antonio to blow
off steam and maybe make a connection.
He thinks she’s
terminally vanilla and straight- laced. She thinks he’s not into her, or with
the way he ignores her curves and tight skirts, possibly gay. Hopelessly
oblivious to what has been staring them in the face for three long years,
Joseph and Olivia continue their aimless search for love. Then, one night, as a
storm brews outside another rages inside as their paths converge. Will Olivia
finally get the Master Prince she deserves, or will her past prevent her from
realizing her dream? Will her presence at the club be the sign that Joseph
needs to wake up and at long last claim the woman he’s yearned for all along?
Follow Maddie
online at the following links:
http://maddietaylorromance.blogspot.com/
https://twitter.com/MaddieTWrites
https://www.facebook.com/maddie.taylor.121772
https://www.goodreads.com/author/show/7045130.Maddie_Taylor