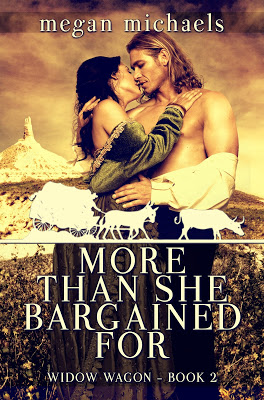 More Than She Bargained For has been #2, and I want to thank all of you for your support.  I’m hoping you’ve had a chance to read the book, and that you’ve enjoyed it.

For those of you who haven’t read it and are wondering if you should buy it, I have an excerpt today that might convince you:)  Daisy has been married about a month now and after causing a commotion in the house, earned herself a punishment with ginger.

Daisy’s eyes turned looking at
the things he brought upstairs from the barn. “Ah, you are looking at my
things. Yes? These will all be used on you today.” He picked up the riding crop
and tapped it on her thigh and then pulled back snapping it hard leaving a red
mark that made her jump and shout. “This will be used on your naughty bottom.”
Her eyes were swimming in tears
as she rubbed the red mark on her thigh with her hand.
He picked up the cardboard box
taking the cover off. His finger pointed at the print inside the cover. “These
are called ‘Rectal Dilators.’ You’ll be wearing all three of these tonight to
prepare you. You will accept my cock into your beautiful ass.” He pulled out
the largest of the shiny silver insertables, holding it up for her to view. “It
looks like it’s too big, but trust me it’ll fit — and it’ll make taking me
easier.”
“Noah!” She dragged out his
name in a whining and pleading voice.
“We have talked about this. You
agreed that someday I would take you there. You agreed — reluctantly, yes — but
you agreed. Today, it’s going to be for punishment, which isn’t as nice for
you. But I’ll still treat you right, and promise you will not be hurt. I will
always be gentle with you. But anal for punishment versus for pleasure is
different. Do you trust me?”
“Yes, Sir.” She had pulled her
pretty red bottom lip between her teeth, staring at the dilators as if they
might leap out and bite her.
“Okay. But first, we’re doing
this.” He removed the small bag from his pocket extracting a piece of ginger
he’d already cleaned and prepared. He pulled out his jackknife and scraped off
the dried outer layer, exposing the moist and potent layer beneath. “Have you
ever seen this used at home when you grew up?”
She shook her head silently,
looking confused.
Good. This’ll keep her
wondering.
“It’s ginger. When you put it
in a horse’s anus, the burn and sting makes them hold their tail up, prancing,
and it makes an older or sickly horse liven up some. It’s good for horse shows,
or when you’re trying to sell a horse.”
He continued to pare the outer
skin. “When it is used on women, it’s called figging. It’s a punishment, and
from what I hear, it stings something awful. The other benefit for punishment
is, if you clench your buttocks during a spanking, you squeeze the oils out,
causing the burn to increase.”
Her eyebrows shot upward. “Y-you
aren’t — you can’t — are you thinking of doing that to me?”
The incredulity in her voice
made him chuckle. “Oh, I’m not just thinking about it, min kære. I’m doing it. Now.” He stood up, watching her back away.
He grabbed her arm before she got too far though. “I hear tell that men usually
insert it while their woman is over their knee, but it takes a couple minutes
for it to start burning. But I can think of a position that is easier for me,
and will be quite humiliating for you. Come lie down on your back on the bed
here.” He helped her to lie down, pulling on her hips until her bottom just
hung off the edge of the bed.
Her legs were draped down, her
beautiful quim on display and accessible. He leaned forward, poking his tongue
into the raven curls, swirling the tip gently, separating the seam until he
found that hard little nub, circling and lapping at it. Her back arched off the
bed, and she moaned, spreading her thighs.
“Lord, you’re going to make
this difficult for me. I’m drawn to your scent like bees to honey.” He sighed
and pulled away, wiping his face on his sleeve. Noah grabbed her ankles in one
hand pulling them up until her thighs pressed against her breasts. “I want you
to wrap your arms around your legs and hold them right to your chest. Do. Not.
Let go. You hear?”
“Ohhhh. Noah, this isn’t
decent!” she whined, her voice breaking into a small sob.
“No, but it’s appropriate. You
embarrassed me horribly with what you did today, so this position will teach
you to think before you speak. You have to learn restraint, girl.” He reached
over, picking up the ginger. “Let’s get this inside you and start your
figging.” He pulled her cheeks apart with one hand, listening to her low whine.
When the cold, wet ginger
touched her anus, she clenched the tight ring of muscles. Noah didn’t hesitate,
landing four crisp slaps to her left cheek, his handprints rising almost
immediately. “Don’t clench your bottom. You’ll be spanked every time you
clench, or try to push this out. It would benefit you to relax, and let this
slip into your dark hole.”
He pushed again, and it slowly
slid into her. He’d chosen a large finger of ginger to prepare her for the
dilators. “Push out, Daisy. It’ll slide in easier that way.” He continued to
twist and turn the ginger until it popped into place at the flange he’d carved
into it. He made it large enough that when held in place it left a piece
sticking out between her adorable cheeks.
She started to pull her legs
down. “Oh no, my girl. Your legs are staying where they are. I’m going to be
watching and playing with your body while we wait for the ginger to kick in.”

We’ll stop there!  If you want to read more of More Than She Bargained For, click on the links below to purchase your copy 🙂

BUY LINKS
Amazon US:
Amazon
UK:
Barnes
& Noble:
iTunes:
ARe:
Oyster:
Kobo:
MEGAN’S PERSONAL
LINKS
Facebook
Pinterest
Twitter
Instagram
Goodreads
**Also, at the top of my page there is a tab labeled Cinch Your Saddle–Free Chapter  that has the first chapter of Book 3 of the Widow Wagon**