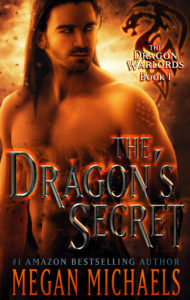 Today is my cover reveal. I’ll be hitting the publish button today and hopefully, you’ll have it in your hands tomorrow. It will be on Amazon and Kindle Unlimited.  Thanks to Eris Adderly for the stunning and spectacular cover…..it has it all–my gorgeous, dark-haired Dragon Warlord and Commander, Prince Drayce Quinn, and of course the fire and dragons!  I swear I’ve wanted to write a dragon book for most of my life, and this book was a blast to write.

I have at least two more books planned and have begun writing the second book.  And a shout out to Celeste Jones for editing–her feedback and suggestions were spot on!

For Satin Tempest, becoming a Dragon Warlord, and marrying the Prince of the dragon planet Trexotera was a lifelong dream. Stealing a spaceship from the planet Zelora probably wasn’t the best way to start a relationship with the Prince. But returning home wasn’t an option once she set eyes upon his muscled body with the scaly dragon skin on his shoulder, his long, black hair, and mesmerizing golden, eyes. She vowed she’d take her chances with the Dragon Prince, and learn to live amongst the dragons.

From the first moment he’d met Satin, Prince Drayce Quinn had fallen in love with the blonde-haired, svelte vixen with the cerulean blue eyes. But it was so much more than her looks, it was her intelligence and independent nature that attracted him to. She might have been strong-willed, even defiant, but that didn’t mean he had exactly what it took to bend that strong will to his. So, when she impulsively stole a spacecraft and traveled to his planet, he couldn’t wait to marry her…and punish her.  Being married to the stern and unyielding Prince and Warlord wouldn’t be easy for his girl, but their nights of passion together would more than make up for it

It didn’t take long before their happy marriage was tested with an unexpected battle and a new, terrifying enemy. The outbreak of war threatened everything, and with it came the possibility of losing each other—forever. But commanding an army of dragons and warlords was what Drayce did best, and the fires of hell itself couldn’t stop he and the dragons from rescuing his bride from the enemy. But would she be safe in his arms? Would his sexual appetites and prowess be too much for her to handle?

Publisher’s Warning:  This book is only intended for those over the age of 18.

(And thanks to Lee Ching, from Under Cover Designs for the formatting and amazing Chapter Dragons on both ebook and paperback!!)

Drayce unbuttoned his pants, skimming both them and his boxers off, sliding them from his feet, tossing them onto the chair with the mound of clothes.

Drayce slowly turned and waited for her to scream or run, but instead, she reached out to touch it.

“It is. Are you okay with that?”  Might as well ask now and watch her leave than take a chance after he’d grown used to her and couldn’t imagine losing her. It would still hurt, but if it were now, he’d get over the loss quicker. He didn’t dare look her in the face; he couldn’t handle the rejection.

Grasping his tentacle tightly, she walked around him, holding it firmly in her small hands and looked him in the eye. “I like it…it makes you dragon-like. Can you do anything with this?  Does it give you magical powers?”

“No. It’s a sign from the Gods that I’m a Warlord of the Dragons, and the dragon patch means I’m a Commander.”

She ran her hand along the length of the tail, and his cock lengthened with the gentle touch. His hard rod bobbed in front of him, and she reached out stroking both now. “What does this tail do?”

“Well, I can fuck you with it – fill either of your holes while my cock fills the other.”

Shuttering his eyes, Drayce waited for the slamming of the bedroom door, and when he didn’t hear the wood rattling the door frame, he peeped an eye open to find her blushing furiously from the top of her head to the tips of her breasts, smiling mischievously at the tentacle.

“It’s red and scaly, like the beautiful ruby-colored dragon in the field outside.”

“That’s my dragon; she sensed right off that we were…similar. She chose me.”  He watched her expressions closely.

Her hand stroked the end of his tail, the sensation snaking down the length and making his ass tingle, his cock reacting to the arousal becoming impossibly hard.

Growling deep in his throat he restrained himself from ejaculating too soon.

“The end of your tail…is it a tail or tentacle?”

“It’s either…you can call it what you wish.”

“It has a barb at the end, will that hurt?”  She toyed with the barbed spikes on either side.

“But when I come, spurting my seed into you, the barbs will harden, and a prong will spring,  keeping the tail inside your orifice, locking us together until we both are no longer aroused…it helps with mating.”

It was a lot to digest in such a short time, but he felt a bit of pride run through him. Satin didn’t seem to be daunted by it. If anything, she seemed intrigued and fascinated at the prospect of having his tail within her body.

“Will you put this in my bottom hole tonight?”