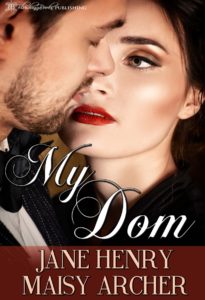 I had the spectacular pleasure of reading Jane Henry and Maisy Archer’s new book, My Dom.   As you will see on Amazon, this will be a new series too, Boston Doms.

These talented women are doing a Giveaway–all you have to do is comment on this blog post with your email address (in case you win;)  and you’ll have a chance to win this book.  It doesn’t get any easier than this!  But you must comment within 48 hours!

Heidi considers herself a strong, independent, professional—definitely not the type to fall for a macho, dominant, alpha male like her neighbor in 6F. Yet when she overhears his kinky, sensual escapades one evening, she finds herself as intrigued as she is horrified. Surely that’s not spanking she’s hearing? And are those whimpers from the woman in his bed caused by pleasure or pain? She tells herself she is not attracted to… whatever they are doing. But when she has an unfortunate run-in with Mr. 6F himself, the connection is electric. To her great consternation, she finds herself imagining what it would be like to be under his authority, or bound to his bed.

But when Heidi and Dom are thrown together in an unlikely series of events that tie them together professionally, they must separate business from pleasure. Or will they?

Shit! Where were her keys? In her purse, which she’d just left in the…

“Back in the car!” she moaned.

Without breaking stride, Dom swung right, towards his building. He quickly unlocked the door and Heidi stumbled through it, into the cool silence of his entryway.

Before she could draw breath, Dom was in front of her, pushing her back against the door, his body flush against hers, his lips on her throat.

Her arms rose to touch him, but he grabbed both of her wrists in his hands and pinned them to the door above her head.

His tongue darted out to lick the sensitive spot just below her ear, a gesture of approval for her quick agreement, and Heidi felt her knees buckle as sensation overwhelmed her. Everything about him excited her – the sight of the broad shoulders beneath his dark blue suit jacket, the strong but gentle hold of his fingers on her wrist, the spicy smell of his aftershave, and the raspy arousal of his voice as he spoke to her.

“I don’t know if you understood what you agreed to, back in that conference room, what you gave me, but here’s our new agreement. You don’t like something, you don’t understand something, you’re freaked out about something, you talk to me, and we will find a solution.”

The steam of his breath against her throat made it nearly impossible to concentrate on his words.

“Right,” she whispered, shifting her head to allow him better access.

“And,” he said, pausing to grasp her earlobe with his teeth and make her gasp. “You do whatever you need to do when you’re out there. You built yourself a career you’re proud of. I would never want this, us, to fuck that up. But in here, Heidi…”

His voice descended to a growl.

As he spoke the words, he pressed his hips more firmly into hers, and she could feel the hard length of his erection burning against her stomach, marking her.

She closed her eyes.

And then suddenly he was gone.

Her eyes flew open. In the bright sunlight that flooded the entryway from the sidelights to the left and right of the door, she saw him standing several steps away, hands fisted at his sides, eyes fixed on her face, chest heaving beneath his fitted dress shirt.

“Sh… shirt?” She could hear the dreamy quality of her own voice, the sound dampened by the thrum of blood in her ears.

She licked her suddenly dry lips.

He wanted her to strip for him?

She could feel a pulse low in her belly.

Eyes on his, Heidi lifted her hands to the top button of her shirt and took a step toward the hall that led to his bedroom.

He moved a single step to block her path.

Here? In the bright sunlight coming from the frosted glass windows?

As though he could read the questions in her mind, he repeated, “Right. Here. Right. Now.”

He slowly shrugged off his suit jacket and tie, then leaned against the wall and folded his arms, watching her.

If he had looked the slightest bit disinterested or aloof, if his voice had held even the slightest hint of the detachment he’d shown his other ladies, she couldn’t have done it. But his eyes didn’t so much as flicker away from her hands as they carefully slid down the placket of her blouse, freeing each button from its buttonhole. And the tension that gripped his body belied his casual pose, as did the massive erection tenting the front of his pants.

Mr. Angelico wasn’t disinterested. Not at all.

When all of the buttons were opened, she shrugged and let the thin material fall to the floor. She looked at him expectantly, waiting for his next instruction.

“The camisole,” he rasped.

Crossing her arms in front of her stomach, she slid the edge of the silky material from beneath her skirt and slipped it up, up, up. Each inch of her belly heated as she exposed it, warmed by the blazing heat in his eyes. It  glided softly over her skin, raising goosebumps, tightening her nipples to hard peaks, until she lifted her arms completely and let the material fall to the floor with a soft whoosh.

If that doesn’t convince you to buy this book nothing will.  But, make sure you comment below with youro email address for a chance to win a copy!!

Jane has been writing since her early teens, dabbling in short stories and poetry. When she married and began having children, her pen was laid to rest for several years, until the National Novel Writing Challenge (NaNoWriMo) in 2010 awakened in her the desire to write again. That year, she wrote her first novel, and has been writing ever since. In 2012, she became interested in the d/s lifestyle, and has discovered her love for writing romance with a d/s twist. With a houseful of children, she finds time to write in the early hours of the morning, squirreled away with a laptop, blanket, and cup of hot coffee. Years ago, she heard the wise advice, “Write the book you want to read,” and has taken it to heart. She sincerely hopes you also enjoy the books she likes to read.

Maisy is an unabashed book nerd who has been in love with romance since reading her first Julie Garwood novel at the tender age of 12. After a decade as a technical writer, she finally made the leap into writing fiction several years ago and has never looked back. Like her other great loves – coffee, caramel, beach vacations, yoga pants, and her amazing family – her love of words has only continued to grow… in a manner inversely proportional to her love of exercise, house cleaning, and large social gatherings. She loves to hear from fellow romance lovers, and is always on the hunt for her next great read.

8 thoughts on “My Dom by Jane Henry & Maisy Archer Giveaway!”