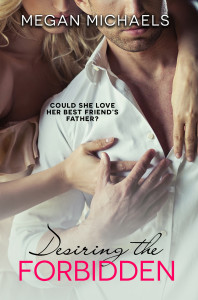 This is the cover of my new book Desiring the Forbidden.  We’re uploading it on Monday and depending on Amazon, it should be in your hands on Tuesday or Wednesday.

Sunni aka Madison Weaver loved her best friend Brittney Johnson and her family.  So when Sunni, as a grown woman, met Cade Johnson years later, she struggled with ‘Desiring the Forbidden’ — a man she had known for years as Brittney’s Daddy but now Sunni found herself very attracted to him.

The big question:  Could she love her best friend’s father?

In this excerpt, we see Sunni going to the Wyoming State Trooper’s station and meeting Cade Johnson.

Madison threw her vehicle into Park, scanning the dark lot. She hoped they were, but before opening the door, she looked up the road for Zack’s car. She closed her eyes, taking in a deep, calming breath.

This is the right thing to do.

The car door creaked loudly as she swung it open, the hinge protesting the frigid Wyoming winter. She slammed it shut, the sound bouncing off the concrete walls of the large building in front of her. Madison held her purse tightly to her chest, the wind blowing her long blonde hair over her face, effectively shielding her. She ran between the black and yellow cruisers, tugging on a cold, metal door handle, dashing into the brightly lit hallway.

She must have looked more frightened than she felt, because the tall trooper rushed toward her. “Ma’am, are you okay?”

“Yes.” She paused, knowing that wasn’t exactly correct. “Well… no, I’m not.” She stole a glance over her shoulder, half expecting Zack or Jared to be stalking toward her.

“Do you need to sit down? Let me take you over to the interview room and get an officer to talk to you.” He grasped her elbow.

“No. Come with me. You’ll feel better in here, I promise you.” He pointed the way, following her closely.

It was small, dark room with a solitary table and a couple folding and Queen Anne chairs with a wooden end table nestled between them.  The lamp gave the room a pleasant, friendly glow over the harsh fluorescent lighting.

“I’d ask you what you’re here for, but that’s not really my job. I’m assuming you need to speak to a trooper, correct?” He motioned for her to sit. She chose the one furthest from the door.

“I’m Officer Wyatt. What’s your name? I’m assigned to the front desk right now, so I’m going to have to hand you off to one of my partners to interview you.”

She wondered whether she should even tell him her name. What if he was like one of those corrupt troopers she’d seen on TV?

Officer Wyatt turned to leave, looking over his shoulder at her.   “You’re safe here, Madison. I promise you. Just relax, and someone will be here soon.”

She pulled at the sleeves of her jacket, trying to cover her wrists. Even inside the warm building, she felt cold. It had to be nerves. She hoped someone would help her at least find a place to sleep that night, a problem foremost among many she needed help with.

Sunni stared at the blank, white walls. She wasn’t even twenty yet, only nineteen and she felt like she’d spent the better part of her life strugging with just surviving. As a child of a single mother, she’d learned to grow up faster than most of her peers.

It didn’t really explain the anxiety and lack of childhood very well in her opinion. That term referred to the fact that they carried a key to open the door on their own. Like opening a door was the biggest issue she had. Carrying burdens a child shouldn’t carry had left scars. Worrying about electric bills and whether her new pink winter coat would mean she and her siblings wouldn’t have lunch this week—those were the concerns she carried as a child.

So when Sunni graduated and found a way to leave her small town, she did exactly that. And she didn’t look back or regret it either. She’d done well for herself. She worked several cashier jobs, sometimes two or three at a time to pay for an apartment and her car. Sunni wanted to attend college. She truly hoped the day would come that she would save enough money, qualifying for student loans to get a degree and a nice office job.

[pullquote align=”full” cite=”” link=”” color=”” class=”” size=””]She didn’t want to cure cancer or change the world, she just wanted to have a lifestyle that would chase away the nightmares that followed (and chased) her many days.[/pullquote]

She knew it would take time and tenacity, she had both at this stage of her life. She’d not find herself in the same situation as her mother. She took care of her body, didn’t date idiots, and made sure to stay on the pill—no unwanted pregnancies in her future. She would choose when and how she became pregnant, she’d be in charge of her body and her future.

But today. Today she needed to get this difficult situation put behind her and be assured that she would be safe in her apartment_-or wherever they would place her.   She knew that opening her mouth would possibly put her at risk, but she also knew that living a life with integrity was important.   She wanted to do the right thing—in all situations. You can’t expect good things to happen by doing the wrong things in the process.

“Sunni? Sunni Weaver, is that you?”

Nobody had called her Sunni since she was a child. She’d moved away from her small town to live in Laramie and hadn’t looked back.

But if someone was calling her Sunni then it meant that they lived in Rawlins, Wyoming.   Madison turned to find a gorgeous man looking at her as he placed his laptop on the table. He had a touch of gray at the temples and sprinkled throughout his sandy brown hair. His eyes were the color of a Persian cat’s — emerald green. He smiled at her, crow’s feet at the corners of his eyes letting her know that he not only was friendly, but also someone who liked to laugh often. His large hard grasped hers, enveloping it completely. It was firm and hard, yet the skin was soft, letting her know that he spent many hours a day at a desk. He yanked her up out of the chair, hugging her tightly.

“My God, it’s been years since I’ve seen you!” He held her at arm’s length, staring intently. “How the hell have you been?”

He shook his head, laughing. “You don’t remember who I am, do you?”

“I’m sorry. You seem familiar, and I think I know your voice. Since you called me Sunni, you must know me from my childhood.”   Her cheeks flushed and she couldn’t stop staring at his eyes. Mesmerizing eyes. She found him very attractive.   Even though he seemed a bit older than her nineteen years, her heart raced when he winked at her.

“Yes, that’s exactly how I know you.   You were friends with Brittney. Brittney Johnson? I’m her dad, Cade—” He raised his eyebrows, waiting for a flicker of recognition.

“Oh, my God! How are you, Mr. Johnson?” She flung her arms around his waist, hugging him closely. “I thought it was you, and then talked myself out it.”

He brushed the hair off her shoulder, kissing her temple. “Hi, Sunni. I thought you’d remember me after a bit. Please call me Cade.”

She quickly pulled away, feeling uncomfortable all of a sudden. She’d loved Mr. Johnson —Cade. Sunni lacked a father in her house, not having the paternal caring and cuddling that her best friend had. Many days, she’d envied her best friend Brittney for that, watching him swing her into the air, kissing her neck or tickling her belly as he walked by. After a while, Mr. Johnson included her in the cuddling and playing. He’d play with them in the park, taking them for ice cream, and then reading with both girls at bedtime.

He stooped over her, looking her directly in the eye. ­ “Hey… you okay? You seem far away.”

Her eyes teared up. She wasn’t okay, her life was out of control, and now she was in danger on top of it all. But with Cade with her once more, she felt safe… and little again. He towered over her, her head only coming up to the middle of his chest, even as a grown woman. When she was a child, he’d seemed larger than a bear when she would visit. She remembered him having to stoop slightly to enter the house without knocking his large trooper hat right off his head.

“So, I hear you need to talk to an officer?”   [pullquote align=”full” cite=”” link=”” color=”” class=”” size=””]His deep voice rumbled through her core, bringing her comfort, and yet, it exuded authority, demanding obedience.[/pullquote]

At a minimum, it meant you needed to stop and listen.   “Am I going to have to put you in handcuffs? I hope not.” He furrowed his brows in mock sternness.

I’ll be uploading Desiring the Forbidden tomorrow and will notify my newsletter readers first!  If you aren’t on my newsletter, enter your email int he box below so you will be notified of my releases before anyone else 🙂

Also, if anyone would like to receive a free copy of Desiring the Forbidden in exchange for an honest review, please contact me at MeganMichaels021ATgmailDOTcom