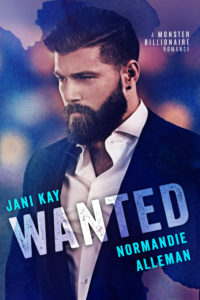 By Jani Kay and Normandie Alleman

Today I have Normandie Alleman andJani Kay on with Mac the Cat who was modeled after my evil kitty- Noelle Belle  @ https://www.facebook.com/Noelle-Belle-Evil-Kitty-479442115576902

As you know there is an evil kitty in many great stories–James Bond’s nemesis had an evil white Persian.  There is an excerpt of Mac below!!

I spent the last five years locked in a cage for a crime I didn’t commit.

Crucified by the press and social media. Hated by all.

But now that I’m a free man, I’m determined to prove I’m not the evil mastermind everyone thinks I am.

I just need someone to believe in me.

Foster Cruise is sexy as hell and worth billions. But he destroyed my family.

He may have gone to prison, but he hasn’t paid nearly enough for what I’ve lost.

He has no idea who I am, but I’m determined to prove what the law failed to—and put him back behind bars where he belongs.

I’ll offer him my body and sell my soul to that handsome-as-hell devil to make things right. 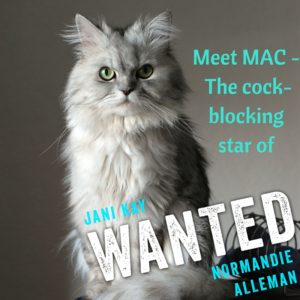 Excerpt – Cock-blocked by Mac the Cat:

The cat didn’t seem concerned. He closed the distance between himself and the can and started eating. I picked up the can and moved it a few feet back. Addison and I gave him space and he slunk his way back to the food.

I moved the bowl, and kitty followed.

We repeated this process several times until the cat was about two feet outside the door to my house.

“Can you open the door?” I whispered to Addison, as if whispering would keep the cat from knowing what I was saying.

She nodded and silently opened the front door.

Only a few bites of salmon remained and our feline friend’s interest in the meal was waning. Impulsively, I leaned over and scooped him into my arms and headed for the front door.

His claws dug into my skin like dozens of sharp knives. Once they were entrenched, the fur ball didn’t stop there. No. He tried to escape my grasp, kicking with all four legs, each stride taking ribbons of my flesh with him.

Before the pain had a chance to sink in, I bolted through the front door, hollering, “Close it.” As soon as I heard the door shut behind me I let go of the whirling dervish in my arms.

The cat darted back and forth, trying to find a safe place to hide in the strange new environment and for a while we didn’t know where he’d gone.

“Oh my God, you’re bleeding,” Addison pointed at the drops of blood welling up all over my arms.

“Do you have any alcohol?”

“Alcohol?” That would hurt worse.

We went into the bedroom where Addison removed my shirt and wiped all the claw marks down with antiseptic wipes she found in the first-aid kit. I liked this Florence Nightingale side of her. In fact, it had my cock throbbing and ready for another round. But when I leaned over to kiss her, we heard that awful rumbling sound again.

“Oh hell no! Where is it coming from?” Addison asked.

We exchanged glances and went back to kissing. But the second I laid down on top of her, there it went again—that low, guttural howl.

“Seriously?” That fucking cat was trying to cock-block me.

“Upset? He just clawed the shit out of me. I’m the one bleeding all over the place, and he’s upset?”

Ignoring the feline protest I reached out and caressed Addison’s breast. She’d been driving me crazy wearing that t-shirt without a bra. I leaned over to kiss her neck then I ran a hand under her shirt. She sighed, which I took as an invitation and I re-positioned myself between her legs. But the first time I ground my hips over hers, he started up again.

Frustrated, I rolled off her and he stopped.

Addison gave me a pitying smile and patted my shoulder. The animal kingdom definitely had it out for me today.

Dejected, I got up and turned off the lights before crawling back to bed. 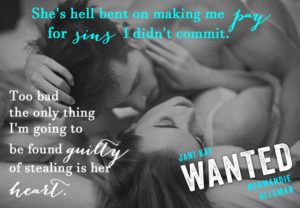 Last year Jani and Normandie were seated next to each other at a book signing where they connected immediately. Soon after they formed a writing partnership that has brought out the humorous side in them both. Their next project is a second Monster Billionaire Romance starring Foster’s friend and international soccer sensation Benedict Morgan from “Wanted.” Look for “Relationship Goals” this Fall.

You can find them here: 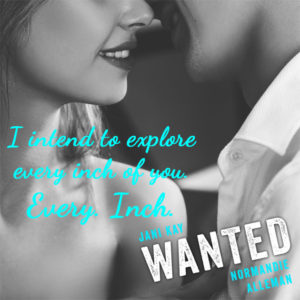