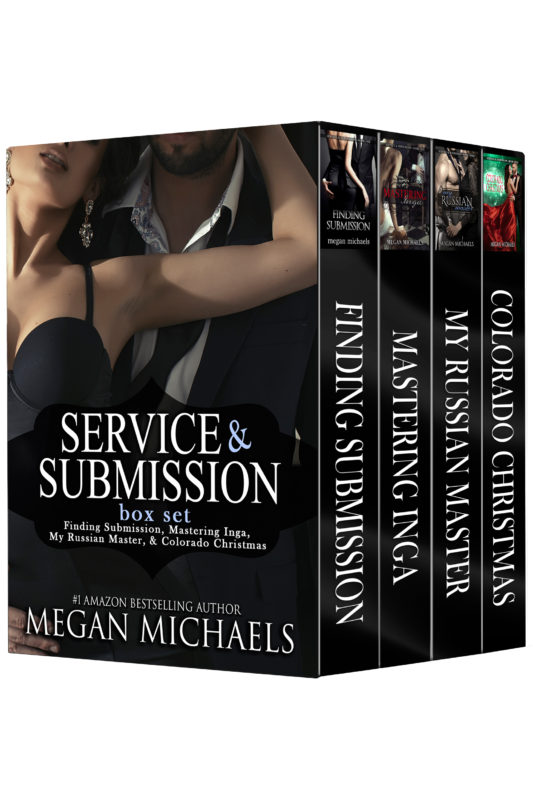 The Service & Submission Series has finally been compiled into a boxed set containing the four best-selling novels of the sweet, sassy submissives and their stern, loving Doms that you all fell in love with.

A strict southern lawyer and a color-outside-the-lines misdemeanor offender should have been like oil and water. But when a Judge’s daughter finds herself on the wrong side of the law, she’s presented with a choice: a fine and possible jail time, or an alternative sentence. Preston — against his better judgment — finds himself agreeing to the rather unique sentence for the wayward girl: house arrest for Avery.

There was one problem for Avery though: the house where she would serve her sentence wasn’t hers — it was Preston’s. Worse, as she learns what working for the strict Preston Harrison really means — and how deep her own repressed desires might go — she fears that she might lose more than her freedom to the devastatingly handsome Dom. She might lose her heart too.

To Inga, serving wasn’t just a job — it was who she was, right down to her bones. The picture of the tall, dark and handsome physician in the assignment profile intrigued her more than the money he offered, more than the generous live-in accommodations, more even than the chance for her to be a caregiver to his two young children in America. No, the picture of the childrens’ father sparked something else in her — an even deeper desire. A need to serve him. For Inga still yearned to serve a man — in every way he required.

A prominent surgeon, wealthy, attractive, and successful, Garrett seemed to have the perfect life. But underneath all of that, he knew one thing for certain: he was a mess. Losing his wife had been devastating enough, but raising two children — alone — only made recovering from her death that much more difficult. Somehow they’d made it through though, scarred, but together. Now, it was time to do something positive, time to take a step forward. And that started with finding someone who could give his two beloved children what he couldn’t — a woman’s touch, a woman’s caring, and a woman’s love.

Heading west to the mountains for a holiday vacation seemed the perfect way to finally get Inga and her friend Avery together. Even better, they’d both get to meet Caroline and her fearsome Russian master, Maxim. And while she knew they’d try to be on their best behavior, with all three of the strong, opinionated women in one place, there were likely to be more than a few sore bottoms before they all boarded their planes for the flight home.

But what might happen when three mischievous submissives and their strict, heavy-handed Doms get together?