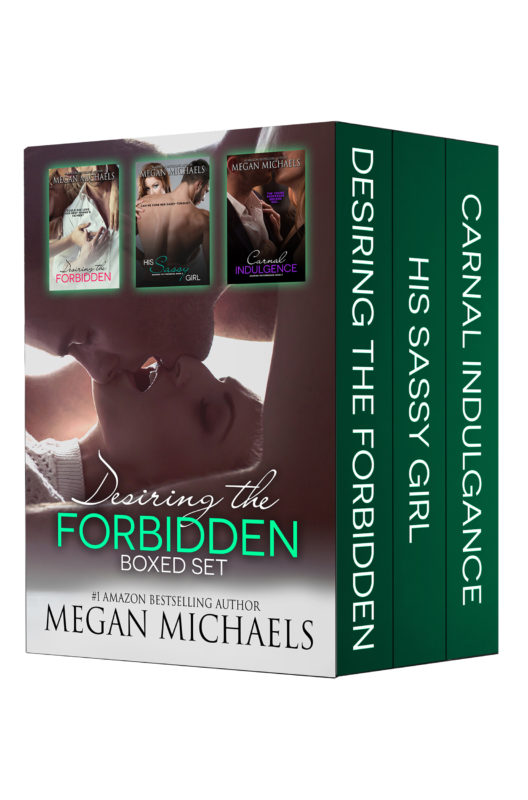 Megan Michaels, #1 Amazon Bestselling Author has compiled the first three full-length novels from the Desiring the Forbidden series into a boxed set at a reduced price.

Why did he have to be her friend’s father?

Cade Johnson couldn’t believe his eyes the moment they’d fixed upon the long blonde hair, curves enough to stop a man’s heart, and the sharp eyes of a woman every bit as smart as she was beautiful. Resigned to living out the rest of his days as a bachelor, married to his job as a state trooper, and devoted father to one strong-willed daughter, the sight of the female he saw huddling in a chair in his station waiting room had his blood boiling, and his body aching with need.

There was only one problem though: she was twenty years younger than him – and she happened to be his daughter’s childhood friend.

Sunni Weaver may have been the big break his investigation needed, but the very thing that made her valuable was the exact reason her life was in danger. It was up to him to hide her, watch over her, and protect her — and along the way, show her that submission to his rules and his lusts, bending her will to his own, offered her a freedom she’d never imagined. Whether she was ready for it or not.

A grizzled state trooper and a sassy, defiant young woman two decades his junior was either a match made in heaven — or one doomed to go down in flames. With her he had a chance to be the man — and the Daddy Dom — he’d always been. His brand of loving strictness and firm consequences might be just what the stubborn woman — and disobedient girl — needed most in her life. A man who’d love her, and discipline her, and make her his in every way a man could.

A defiant, strong woman. An implacable alpha male disciplinarian. An explosive collision of passions — and the yielding of a girl’s heart.

Dylan’s known Dr. Maddox Parks as Brittney’s professor. But the man was much more than Brittney’s stern college instructor. He was also a member of a very exclusive establishment, The Playpen. Could the alluring world of the Playpen be the key to breaking down Brittney’s defenses, to showing her who she might really be inside? But will the arrival of Brittney’s father, and his own special girl, Sunni prove too much for Brittney to handle, forcing her to run from Dylan — and from herself? What happens when you get three sassy, independent and mischievous women in a BDSM Club? Will any of them decide to take their relationship to the next level — going deeper than any of them ever expected?

Maddox thought he’d convinced Elizabeth to embrace the fact he was fifteen years younger than her. He’d even seduced her into enjoying — and thriving in — his ageplay tinged D/s dynamic. But those had been the easy parts. Now, four years after they’d first met, they were planning a wedding.

Something had changed with their engagement though — and not in a good way. Was it simply Elizabeth having cold feet about their impending nuptials, or was it a much deeper problem? Perhaps it was the delicious irony of a forty-five year old woman playing the “little” to a thirty year old Dom? The big event was going to be much more than a mere wedding though, the silver collar in his dresser drawer just waiting to be placed in its rightful place around Elizabeth’s neck. Could that be the issue?