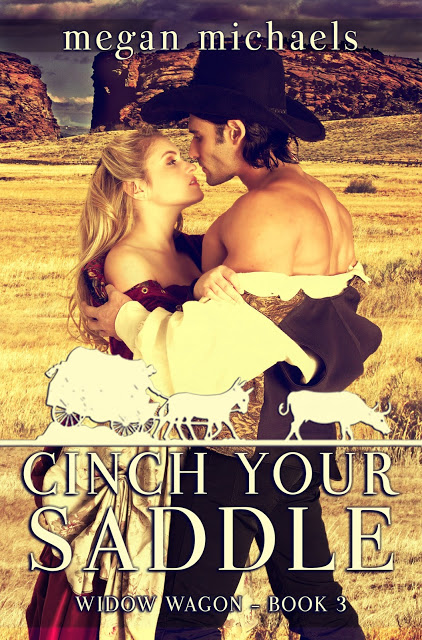 Not even the dry, barren prairie can keep the flower of love from blooming…

Like so many others, tragedy brought Clara to the Widow Wagon. The only life she’d ever known left in ashes, a chance at a new life in the American west was the last option she had. Young and headstrong, Clara wouldn’t let the horrible hand she’d been dealt define her, confine her to the prison of sorrow and loss. No, she’d make a new life, a fresh start in the hardscrabble west, where anything was possible … if you wanted it badly enough. She’d planned for the arduous journey, the unpredictable weather, and the deadly Shoshone. What she hadn’t planned for was one gruff, muscular, heavy-handed Alpha male … who just happened to be the wagonmaster himself.

For Angus, life as the Widow Wagon’s master was an escape — from a life he thought had passed him by, from a past of unspeakable pain and grief. Guarding the lives and hopes of desperate women dreaming of a new beginning in the wide-open west had allowed him the chance to heal, to chart his own course. Doing all he could to give his charges the promise of a brighter tomorrow, he’d never allowed any of that promise, that hope for himself. That is until the day he’d met the fiery, defiant — and gorgeous — Clara.

A grizzled, rough-around-the-edges wagonmaster and a strong-willed, sassy city woman seemed a match doomed from the start, but Angus knew just how to tame that strong will, to bend it to his, to mold, but not break, that spirit that drew him to the beautiful, curvy Clara. It was a journey of a thousand steps — and the first one would be a long, hard bare bottom spanking. But when outlaws kidnap one of Clara’s companions, forcing the widow wagon to halt its journey, the harsh reality of a dangerous, lawless west might prove too much for even new love to overcome.

This sensuous romance contains explicit sexual situations, spanking, and wax play. This book can be read as a standalone. Enjoyment of the novel will be enhanced by reading the previous entries in the series, but it’s not necessary.