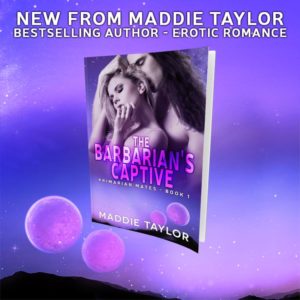 Thanks for having me on today, Megan, the final stop on my mini-blog tour for my bestselling sci-fi romance, The Barbarian’s Captive.

This little book is near and dear to my heart.  First, because even though I’ve always been a sci-fi fan, I never rose to the challenge of creating a whole new world and race before.  I gotta say, I’m glad I did.  And second, because I went out on my own with this one.  Well, not quite solo, I did have help from my wonderful editor, Trent Evans, Rachel at No Sweat Graphics who did my gorgeous cover, and all the friends who have been down the self-publishing path ahead of me and offered advice; Megan Michaels and Maggie Carpenter, in particular.  Thanks so much, everyone!

And, now that it’s here, I love sharing tantalizing glimpses and tastes into this new world blessed with a race of tall, gorgeous, thoroughly dominant men.  Mm, mm….  Enjoy… 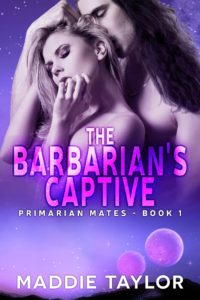 He released her wrists and brought them around to his chest, again transferring them into one of his own.  Then his free hand found her bottom, squeezing each cheek in a sensual caress before his hand popped sharply across the crest of first one, then the other.  Immediately after, the slow massage resumed, his hand heating her skin in a very different way now.

Shocked, Eva pushed up on her forearms and stared down at him.  As he gazed intently up into her eyes, his fingers trailed lightly from the crest of one cheek, slowly down the lower curve to where it met her thigh.  His body shifted, one of his legs moving between hers and separating them.  He cocked his thigh so that it rode between her own and her knees and lower legs rested full on the linens.  With his glimmering gaze locked on hers, her lips parted on an indrawn breath as his fingertips slid between her spread thighs and found the wet seam.

A small noise caught in her throat as he hitched his leg forward, shifting her body so that she came off her arms and rested on him chest to chest.  Then he traced downward, delving between her lips, almost touching the sensitive nub at the front that had begun to pulse with eager anticipation.  At the last moment, he reversed direction, and moved back up along the cleft of her bottom, gliding all the way up to the top at a scintillating snail’s pace. Here, his palm came into play again, connecting firmly as he alternated swats from side to side. And with each forceful blow that splatted on her behind, her pussy made direct contact with his bare thigh, sending jolting vibrations directly to her clit.

Her entire body trembled as the heat of arousal rippled through her.  She wanted him, despite everything. Looking down into his eyes, she saw that damned black brow quirk upward in silent acknowledgement.  He knew exactly what he was doing to her.

“I can give you pleasure when you are a good, or a smarting backside when you are bad.” His hand came down again, although instead of a spank, he squeezed and kneaded her flesh, separating her cheeks as he massaged so that his fingertips grazed wonderful wet places in between.

“It is up to you to decide which path you take, mate.  This has been but a sample of both.”

She breathed out raggedly as she squirmed, needing more friction as she ached with desire.

Light years from home, plant biologist Lt. Eva La Croix and her all-female exploration team land on a planet they believe is a perfect substitute for the dying Earth.  They are set upon by huge alien hunters and Eva is captured by the barbarian leader.  Tossed over his shoulder, she is carried back to camp, tethered to his bed, seduced by his touch, and claimed as his own.

In spite of her fear, she is captivated by the gorgeous, dominant male with his long gleaming black hair, smooth bronze skin, and glimmering golden eyes.  Expecting her full compliance, he strips her naked and prepares her for an intimate and very thorough inspection.  Horrified, Eva protests, but quickly learns defiance will be met with swift consequences, including a bare bottom spanking until he proves to her who is in command.

Deemed compatible, she and her teammates are whisked away to the barbarians’ world where they are mated to these powerful men.  While pampered and protected, the women are expected to submit to their male’s authority and breed their young.  Will Eva learn to adapt to their unusual beliefs and old-fashioned ways?  Can she sacrifice her independence and surrender to this dynamic, highly sexual alien male who has conquered her body, and perhaps her heart?  Or when escape is imminent, will she flee with the others, never to see him again and feel the rampant desire that now surges through her blood for her compelling barbarian mate? 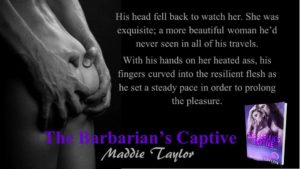 Keep up with Maddie at the following links:

One thought on “The Barbarian’s Captive by Maddie Taylor”