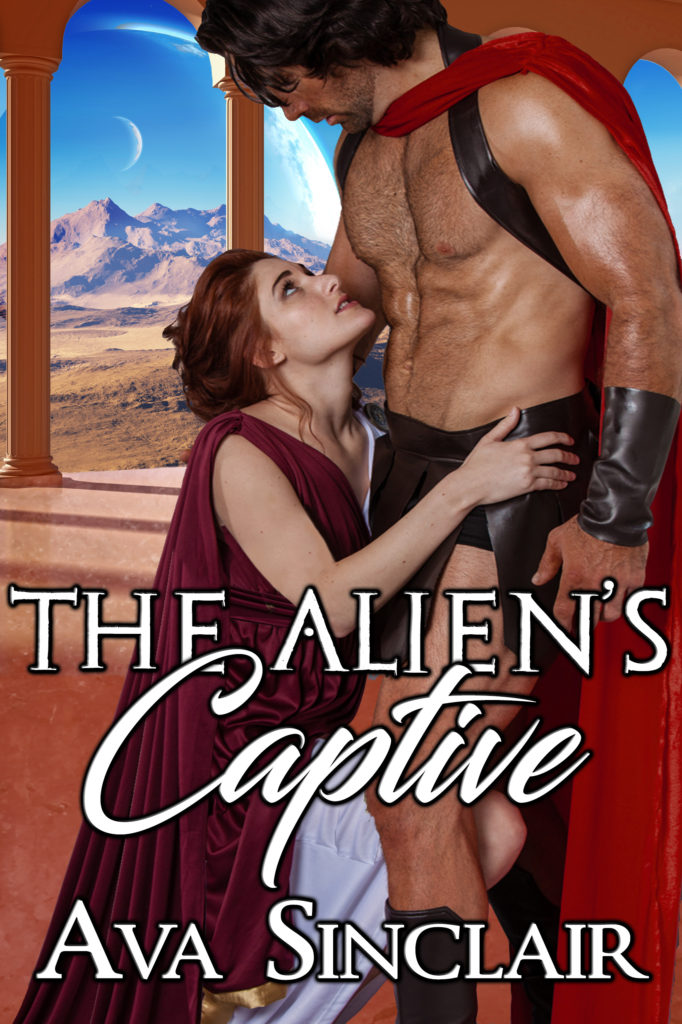 I have Ava Sinclair visiting today with her new book, THE ALIEN’S CAPTIVE!   After reading the excerpt, if you haven’t already purchased this book, click on the cover above or the links below to get it onto your Kindle!!  I hope you enjoy it!

General Augustus Bron, Commander of the Traoian Iron Guard, has never approved of the practice of capturing human women and training them to serve the rich and powerful of his world. He knows, however, that success in politics is all but impossible without the social status granted by ownership of a human pet, and with his planet in desperate need of new leadership he sees little choice but to obtain one for himself.

When she pieces together a connection between five missing women, reporter Phaedra Ellis knows she is onto something big, but before she can go public with her story she is taken from her apartment in the middle of the night and brought to a facility unlike anything she has ever seen before. To her shock, Phaedra is informed that she is no longer on Earth, and more disturbing still, she is now the property of a huge, powerful alien warrior who will not hesitate to bare her bottom and spank her soundly should she dare to disobey him.

After an intimate, deeply humiliating medical examination confirms her suitability as a pet, Bron begins Phaedra’s training. Though taming her will require a firm hand and punishments much more shameful than a mere spanking may be necessary from time to time, he has no doubt that he is up to the task. But despite his efforts to remain stoic, his beautiful little human has soon claimed a place in his heart. When Bron’s enemies seek to use his growing love for Phaedra against him, can the battle-hardened soldier find a way to protect both his planet and his pet?

Her heart was pounding. What did he mean? He was completely silent as he loomed over her, but then a finger dropped to her collarbone and trailed lightly down her skin, and something in so light a touch from so huge a man caused a shudder to run through Phaedra’s small body. When that finger reached her breast, the tip of it circled the areola, sending tiny goosebumps of flesh on her skin and causing her nipple to harden almost painfully.

She could feel the wetness starting to form between her legs as his finger now circled the other nipple. Phaedra scrunched her eyes shut tight and squeezed her thighs together, as if that could stop the throbbing of her pussy. When she opened her eyes, she could see Bron looking down at those clamped thighs, and when he drug his gaze up to hers, she could tell he knew her body was already betraying her. The corner of his mouth was curved up in a knowing smirk, and at that moment Phaedra’s anger flared.

“NO!” She began to pull against the restraints, to kick her legs, to arch away from Bron while calling him every vile name she could think of. And he —the beast!— was perfectly calm as he caught her, turned her over, clutched her by the waist, raised her ass and began to spank her with hard, heavy blows.

“OWWWW!” Her protests and profanities turned to sobs and pleas as her captor’s hard hand fell and fell and fell. He did not spank her quickly, but methodically, carefully timing the blows and letting her whimper in expectation of each one. He was suspending her in a full state of helplessness, forcing her to connect with it.

Where the other spanking had been corrective, this one sent a message: I have all the time in the world to spank your bottom. And there’s nothing you can do to stop me.

The burn of the spanks went subdermal. Her bottom felt as if it were throbbing. Each spank echoed through the room. When Phaedra looked back in one frantic, pain-filled moment, she could see Bron staring between her kicking legs. This made her wail even louder, for she knew what he saw—an exposed pussy glistening wet with need.

“Please!” Her voice was hoarse now, and she could barely expel the word. Bron was rubbing her sore bottom, his hand inflaming the burning surface with each pass. For good measure, he squeezed a punished cheek before wordlessly turning her back over. Her bottom was so tender that Phaedra arched away from the bed, but when Bron placed a hand on her pelvis, his expression was so serious that she dropped her pulsing haunches to the mattress, tears of defeat leaking from her eyes.

“Again.” It was a single word that marked Bron’s intention of resuming his lesson, as if the spanking were merely a trivial interruption. His finger went back to her nipples, circling one and then the other. And despite the discomfort in her bottom,

Phaedra’s pussy once again clenched hungrily. She did not shut her legs this time; there was, she decided, no use trying to hide what he could so easily reveal.

The finger moved between her breasts, trailing down and down and down past her navel to the crest of her Venus mound to the top of the deep cleft of her pussy. He ordered her to spread her legs wide, and after weighing the cost of disobedience, Phaedra obeyed, focusing on the ornate tiles of the high ceilings for want of distraction.

But there was no distraction great enough to draw her attention away from what he did next. Bron parted Phaedra’s labia with two large fingers and touched the little gold shield that covered her clitoris. It all but melted away under his finger, and when the air hit that little nub of flesh, she felt it pulse and swell and throb.

“You’ve drugged me.” She looked at him accusingly, unwilling to admit that her arousal was a natural reaction, given her situation.

“You’ve drugged me.” Phaedra’s tone was insistent, angry. “Why are you making me act like this?” She moved her hips, desperate to dislodge the finger that was now moving on that sensitive little pearl in maddening circles.

He laughed. “Oh, little human. You seek to keep your dignity by denying the truth. You need no drugging. You are under the sway of your own natural desires. You cannot control your passion, whether it be the desires of your body or your urge to unleash your tongue when you should remain silent.” He paused as his finger moved up and down, and Phaedra moaned. “You must learn to curb your passions.”

Once upon a time, there was a young woman who found the only way to get her kinky reading fix was to haunt questionable sections of the bookstore and – when no one was looking – snatch up a copy of “Penthouse Letters”, which she proceeded to hide inside a magazine for camouflage.

Oh, how times have changed. No longer a young woman, Ava Sinclair is pleased to live in an exciting time when all manner of erotica is available at the click of a button. And she’s so very proud to be one of the writers her younger self would have wanted to read.

From her beginnings as a contributor to the first online purveyor of female erotica, Bethany’s Woodshed, Ava Sinclair went on to not only write but to become an executive editor in the industry. In 2015, she returned to writing fulltime when she published “Marshal’s Little Girl” with Stormy Night Publications. That book led to a string of a dozen bestsellers, nine of which became #1 Amazon bestsellers.

From alien worlds to western towns to windswept Highlands to shadowy government institutes where women are taken for training, Ava enjoys creating detailed worlds and crafting believable plots that frame sizzling scenes of sex and domination her readers have come to love.

She resides in the green hills of southern Virginia with her family, an indecent number of cats, her little dog and an Eagle Owl named Lucius. When she’s not writing, she can be found reading, scouring antique shops for vintage teacups, or riding her horses.