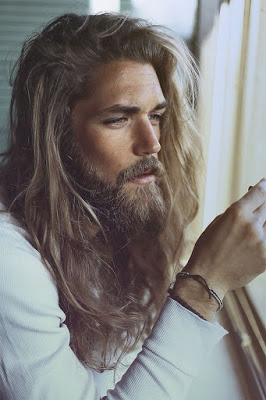 When I stumbled upon this picture, I knew instantly that it was Noah.  It’s how I envisioned him–The tall, strong, stern Dane who trains horses.

Daisy finally met her match–and as a gifted horse trainer, Noah knows how to bring a wild filly to heel and submit.

I experimented with something I’ve never written before–pony play.  It’s “pony play lite”–there is only the tail (no other elements of pony play), therefore, it’s very similar to kitty play, and I enjoyed venturing out into it. I hope you enjoy it as well.

In this scene Daisy has been punished and a “rectal dilator” has been inserted with a special added feature. By the time the day is done, Daisy will have learned a very difficult lesson.

Daisy walked the stairs —
awkwardly. It was the only way to describe it.

How else do you walk with a rectal dilator and a horse tail?
Casually? Proudly? With a modicum of social grace?
If that was the case, she
failed on all accounts. She staggered down the stairs slowly and uncomfortably.
What rankled her beyond words, when she finally made it to the parlor, was
seeing him standing with a big grin on his face. She stopped and purposefully
glared at him; if looks could kill, he’d be a dead man. How dare he laugh at
her!
He cleared his throat and
rubbed his hand over his face trying to look serious. “I’m sorry, my dear.
Having some trouble moving are you, yes?” He said it with that damn Danish
accent.
Yes? Yes, you damn fool!
But rather that tell him what
she really thought, she smiled at him with as much sweetness as she could
muster. “No, not at all. Thank you for asking.”
She brushed by him, making her
way over to a chair. But rather than sit, she stared at the chair for a moment,
her nakedness making her hesitate. And did she want to sit down with something
sticking out of her butt?
“Don’t worry about it, Daisy.
You’re not going to be sitting in a chair. You’ll be on the floor on your hands
and knees.” He pointed to the floor in front of him as he sat down on his
chair. “Min kære, I’d listen if I
were you — at least until your bottom turns from red to pink.”
Since it seemed to be the right
decision, she slowly went down to her knees, but hesitated in leaning forward.
She looked up at Noah and he raised an eyebrow at her, confirming he expected
her obedience. She leaned forward on her hands, the heat of her blush rising up
her neck, her breasts dangling below her. She closed her eyes, willing herself
to think of something — anything — else.
Crack! Her body rocked forward and
she quickly sat back on her haunches. “Ohhhh! That hurt!”
“Back on your hands and knees
or you’ll get four more cracks of the crop.” He waited until she leaned forward
again, then slapped the crop against her bottom again, the sting spreading
across her injured flesh.
“But I went onto my hands and
knees!” Daisy whined. She didn’t want to disobey but she couldn’t help wagging
her hips, trying to shake out the sting. The tail brushing across her thighs
made her stop, and she looked back at him to see if he’d noticed.
Yep, he noticed.
He stared in silence at her
ass, at the dangling tail that tickled the backs of her thighs. “God, that was
fucking hot. I may have to slap your bottom with this more often, just to see
your ass wiggle and the tail sway.” He leaned forward and slid his finger between
her pussy lips, flicking the tip quickly over her clit. Daisy dropped her head
unable to contain a low moan. Although she fought it, her hips thrust forward,
and once again the tail whispered against her skin.
Noah reached around her, his
large, callused hand gripping her breast, squeezing and milking the flesh,
tugging on her nipple until she gasped in pain and arousal. Her juices let
down, drenching her sex, wetness dripping down her thigh. He timed the tugging
of her nipple with the twisting of her butt plug, her moans coming in a
staccato rhythm matching the throb of her clit.
Then, with no warning, he
pulled his hands away and slapped her ass. “Okay, enough of that. Time for you
to clean. I’m going to enjoy watching you mop the floor like this.”
Clean? What does he mean? I
can’t clean naked.
She noted he’d pulled the
drapes so no one would see if visitors happened to come calling. Had he been
planning this all along?
“Did you say… clean?” She hated that her voice sounded
small and squeaky, but she couldn’t fathom the possibility that he’d actually
make her do this.
“Yes, my dear. Your vile mouth
and words made my cleaner leave for the day. Someone has to mop my floor.
Besides, it’s good for a pony to have tasks for the day. It builds endurance
and stimulates the mind.” He slapped the crop across both of her paddled
cheeks.
“Ow! That hurts!” She reached a
hand around to rub the offended flesh.

“Then you better get moving and stop complaining. Also, I need you to
bring me my sandwich and a drink. 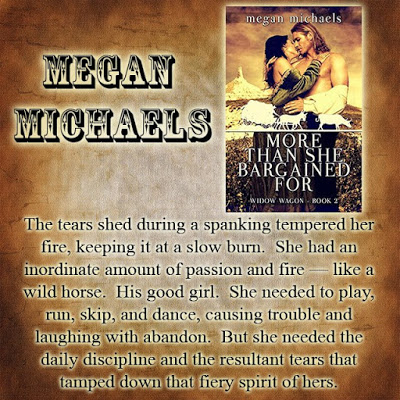 We’ll stop there!  If you want to read more of More Than She Bargained For, click on the links below to purchase your copy 🙂

BUY LINKS
Amazon US:
Amazon
UK:
Barnes
& Noble:
iTunes:
ARe:
Oyster:
Kobo:
MEGAN’S PERSONAL
LINKS
Facebook
Pinterest
Twitter
Instagram
Goodreads
**Also, at the top of my page there is a tab labeled Cinch Your Saddle–Free Chapter  that has the first chapter of Book 3 of the Widow Wagon**