After allowing herself to be taken captive in order to save her friends, Morgana awakens to find herself naked, bound, and at the mercy of a handsome doctor named Kade. She cannot hide her helpless arousal as her captor takes his time thoroughly examining her bare body, but when she disobeys him she quickly discovers that defiance will earn her a sound spanking.

His stern chastisement and bold dominance awaken desires within her that she never knew existed, but Morgana is shocked when she learns the truth about Kade. As a powerful shifter and the alpha of his pack, he has been ordered by the evil lord who took Morgana prisoner to claim her and sire children with her in order to combine the strength of their two bloodlines.

Kade’s true loyalties lie with the rebels seeking to overthrow the tyrant, however, and he has his own reasons for desiring Morgana as his mate. Though submitting to a dominant alpha does not come easily to a woman who was once her kingdom’s most powerful sorceress, Kade’s masterful lovemaking is unlike anything she has experienced before, and soon enough she is aching for his touch. But with civil war on the verge of engulfing the capital, will Morgana be torn from the arms of the man she loves or will she stand and fight at his side no matter the cost?

[pullquote align=”full” cite=”” link=”” color=”” class=”” size=””]Only it wasn’t over. His fingers returned to the skin of her thighs, reaching back toward her pussy, only this time he took his ungloved palm and pressed it up against the heat radiating from her core.[/pullquote]

Quivering at this mark of ownership, she waited almost breathlessly, nervously anticipating what he was going to do next.

Kade’s thumb began to circle her pulsating clit, and Morgana nearly fell apart at the intensity of the flood of lust that overcame her with his gentle caress. The rest of his fingers continued to stroke her moist lips, persistently coaxing her toward the edge into a world of pleasure. He played her body like a well-tuned instrument, as though he knew exactly where to touch in order to drive her insane with desire. After all the incredible feelings of need that her examination had brought forth so far, she knew she wouldn’t be able to keep herself from orgasm for very long. Panting, she felt a soft sheen of sweat begin to coat her body.

Her hips reached toward him and almost as if rewarding her, he slipped one finger and then another inside her wanting pussy. Once he began to massage her inner walls, along with his still attending thumb on her clit, her orgasm finally broke over her. Her entire body tightened with her release, muscles tense with the ferocity of the extreme pleasure that raged inside her.

Her moans increased with frantic desire as she writhed under his touch, and the throbbing need inside her seemed to grow to dizzying proportions. All at once, it seemed like her world fractured and her body sang. Her orgasm seemed to go on forever and ever, an endless blaze igniting fireworks throughout her body, all the way down to her fingers and toes.

[pullquote align=”left” cite=”” link=”” color=”” class=”” size=””]Finally, her body simply smoldered with the aftershocks of her release. With a sigh of relief, Morgana allowed herself to just breathe.[/pullquote]

She lay limp on the metal table, held steady by the taut leather cuffs that bound her ankles and wrists. Meekly, she lifted her eyes to meet his, and saw something deep within those yellow irises, something that looked animalistic, but strangely satisfied. He looked pleased with her reaction, when all she felt was shame for her body’s wicked and wanton response.

Suddenly, a dangerous look came over his face, and a smirk played at the corners of his lips. He removed his hand from in between her legs, drifting his fingertips across the trembling flesh of her inner thighs until his caress grazed against her bottom cheeks.

Morgana tried to squeeze her legs shut, but her ankles were bound too far apart. He had complete access to every inch of her, and from the look on his face, he knew it. A whimper emerged from her throat as he continued to explore the curves of her bottom, before he began to part her cheeks. Her eyes went wide in response.

This new release is the direct sequel to A Gift for the King. If you haven’t read that yet, here’s the buy links below. 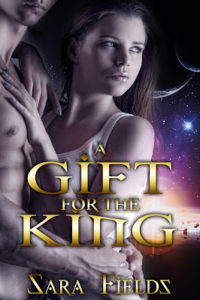